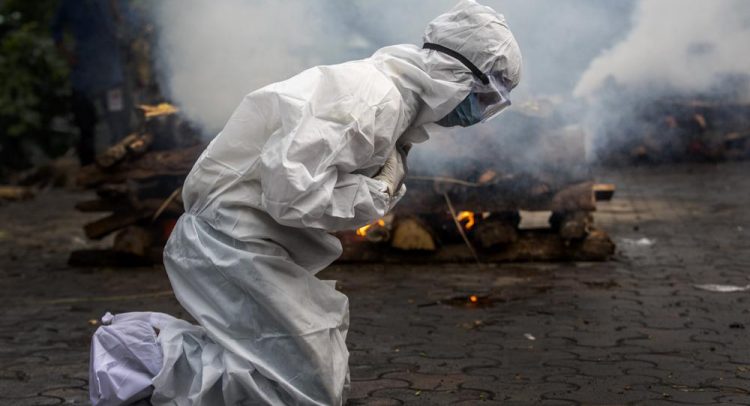 NEW DELHI (AP) — India on Friday crossed the grim milestone of more than 400,000 people lost to the coronavirus, a number that though massive is still thought to be a vast undercount because of a lack of testing and reporting.

More than half of India’s reported coronavirus deaths — the third most of any country — have occurred over the past two months as the delta variant of the virus tore through the country and overwhelmed the already strained health system.

New cases are on the decline after exceeding 400,000 a day in May, but authorities are preparing for another possible wave and are trying to ramp up vaccination.

The Health Ministry said that 853 people died in the past 24 hours, raising total fatalities to 400,312. It also reported 46,617 new cases, taking the country’s pandemic total past 30.4 million.

India, a country of nearly 1.4 billion people, is the third to cross 400,000 deaths, after the United States and Brazil.

Experts believe India’s reported deaths and infections are massive undercounts. They say an untold number of people died during the April and May surge outside of hospitals and before they could be tested for the virus.

A model from the University of Washington’s Institute for Health Metrics and Evaluation estimates there have been more than 1.1 million COVID-19 deaths in India.

India’s federal ministers from the ruling Bharatiya Janata Party have dismissed reports of undercounting as exaggerated and misleading.

Even as cases are on the decline, experts worry India could be at risk of another surge of the virus because less than 5% of the population has been fully vaccinated.

Health Minister Harsh Vardhan said Wednesday that vaccination speed has picked up after a new policy announced last month ended a complex system of buying and distributing vaccines that overburdened states and led to inequities in how the shots were handed out.

Under the new policy, the federal government will buy 75% of all vaccines in use in India and give them to states for free. Private hospitals can buy the remaining 25% at prices that have been capped and can charge for them.

Vardhan also said 120 million doses will be made available by the government in July.

The hope is that India will achieve a rapid increase in inoculations in the coming months. Last month, the head of India’s COVID-19 task force told reporters that about 2 billion doses could be available by December under a roadmap that depends on India’s two main suppliers — Serum Institute of India and Bharat Biotech — ramping up production and five other potential vaccines being made available in the coming months.

But some have raised questions over whether this is a realistic estimate as both of the country’s main suppliers have struggled to boost manufacturing.

On Tuesday, it was announced that the Moderna shot will soon be the fourth vaccine to be administered in India after the AstraZeneca shot, Bharat Biotech’s Covaxin and Russia’s Sputnik.

India’s Zydus Cadilla has also applied to the government drug controller for emergency use authorization of its DNA vaccine. The vaccine can be used for both adults and young people in the 12-18 age group, the company said on Wednesday.

The story has been corrected to show that India reached the milestone on Friday, not Thursday.

A woman breaks down as she prays before the cremation of a relative who died of COVID-19 in Gauhati, India, Friday, July 2, 2021. India on Friday crossed the grim milestone of more than 400,000 people lost to the coronavirus, a number that though massive is still thought to be a vast undercount because of a lack of testing and reporting. (AP Photo/Anupam Nath)

Back at Centre Court, Coco Gauff impresses Dad with poise