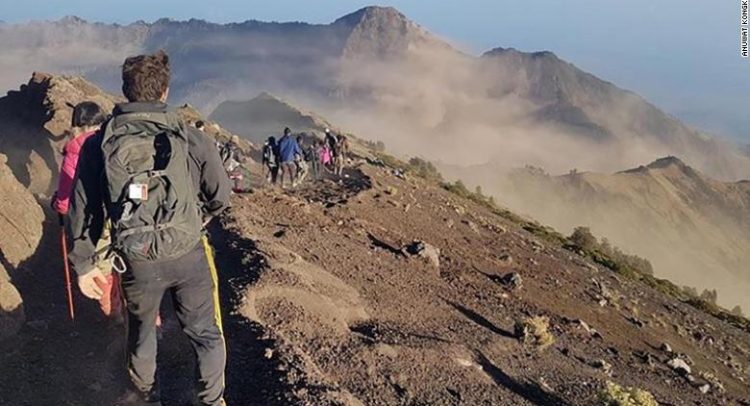 Nearly 700 people are trapped on a volcano on the popular Indonesian tourist island of Lombok, after a devastating earthquake killed more than a dozen people.

A rescue operation is currently underway for tourists caught in landslides on Mount Rinjani, an area popular with hiking enthusiasts. According to National Disaster Management Agency spokesman Sutopo Purwo Nugroho, 689 people are still trapped on and around the 3,726 meter (12,224 ft) mountain following the shallow 6.4-magnitude earthquake that struck Sunday morning.
At least 260 people had already been evacuated by Sunday afternoon, Sutopo said on Twitter, while a spokesman for Rinjani National Park said another 109 had been rescued as of 2 p.m. local time (3 a.m. ET) Monday afternoon.A photo shared by Anuwat Kongko, a 28-year-old hiker from Thailand who was on top of Mount Rinjani when the earthquake hit.
According to Indonesia’s national disaster management agency, 149 climbers are still believed to be stranded on the volcano itself, while 500 people are trapped in Sembalun Village on the volcano’s slopes, and an additional 40 tourists are in nearby Batu Ceper.
At least one climber had died after being struck by falling rocks, Sutopo said.
Videos given to CNN by a Thai trekking group, Trekmania, who were on Rinjani when the earthquake struck show enormous clouds of dust covering the slopes of the mountain, triggered by the landslides.
Tipatai Phusit, a hiker from Thailand, was on top of Mount Rinjani when the earthquake hit, and said he saw a number of people hit by rocks and debris.

“I saw landslides and there were some people falling down. After that I was falling down there too,” Tipatai told CNN in a message on Facebook. He added that the group he was with quickly climbed back to the summit and descended the mountain to safety.
A rescue team of 184 people set off Monday morning to evacuate the hikers, including special military, police and medical teams.
So far 15 people across the island have been reported dead following the earthquake, while another 162 have been reported injured, according to Indonesia’s National Disaster Management Agency.
Pictures from the scene of the disaster showed locals picking through the rubble of their collapsed homes, and the injured hastily bundled into makeshift emergency shelters.

Indonesian President Joko Widodo flew to the island Monday to meet with the communities affected by the earthquake as emergency aid began to be dispersed to the island.
Among those killed in the quake was a 30-year-old Malaysian female tourist, Antara said. Malaysia’s Deputy Prime Minister Wan Azizah Wan Ismail mourned her loss in a statement Sunday.