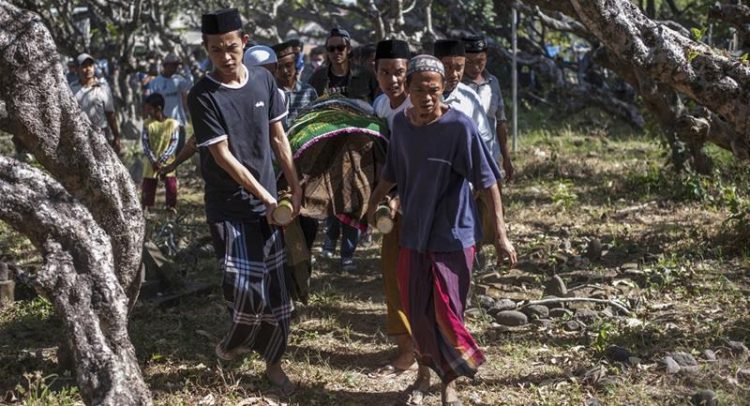 The death toll from a major earthquake on the Indonesian island of Lombok reached more than 430 on Monday.

Bodies were still being pulled from destroyed buildings following the shallow 6.9-magnitude quake on August 5 that levelled tens of thousands of homes, mosques, and businesses across Lombok.

A week earlier, another tremor hammered the island, killing 17 people.

“Search-and-rescue teams are still removing victims who were buried beneath collapsed buildings and landslides,” said Sutopo Purwo Nugroho, a spokesman from the National Disaster Mitigation Agency.

The total number of people killed is now 436, Nugroho said, with more than 1,300 injured and nearly 353,000 internally displaced.

The majority of those killed – 374 people – died in the north of the island, near the quake’s epicentre. Most deaths were caused by collapsing buildings and falling debris. Many people are sleeping in tents near their ruined homes or in evacuation centres. Makeshift medical facilities have been set up to treat the wounded as many hospitals were among those destroyed.

Damage to infrastructure, particularly roads, are frustrating efforts by relief agencies to distribute aid in the north, prompting concerns of a looming humanitarian crisis.

Nugroho said helicopters have been air-dropping supplies to isolated communities, many of which are in urgent need of drinking water, food and medicine.

“It’s very much still an emergency response operation,” said Rosemarie North from the International Committee of the Red Cross.

The economic cost of the earthquake is estimated to be $342m.

Indonesia is prone to earthquakes because of its location in the Ring of Fire, an arc of volcanoes and fault lines in the Pacific Basin.

In December 2004, a magnitude-9.1 earthquake off Sumatra island triggered a massive tsunami, killing 230,000 people in a dozen countries.