The application is also claiming that the Attorney was not properly installed in the Assembly, and that he had no right to vote on the recent Bill to increase the number of senators. They are equally charging that the Speaker, Curtis Martin, was not right in his action to singularly amend the Order Paper of the parliament, to allow Mr. Hamilton to be sworn in.

The matter is being heard by Justice John Benjamin, who normally is stationed in the Nevis Circuit of the High Court. This has become necessary because resident Justice Errol Thomas has taken the decision to recuse himself from the case. Thomas was also the judge who presided over the recent swearing of Hamilton as at Attorney General.

The request for the injunction was filed by Members of parliament, Mr. Sam Condor and Mr. Shawn Richards. This was accomplished on Friday 1st February, 2013. 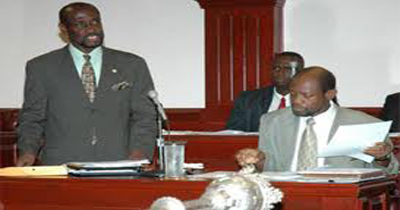 If the injunction is granted, it could severely affect the government’s chances of having its budget passed whenever that Bill is brought to the floor of the parliament for debate and vote. The Increase in Senators Bill was narrowly passed by 1 vote a few weeks ago. That one vote margin 8-7 was facilitated by the vote of Mr. Hamilton.

However, Prime Minister Dr. Denzil Douglas, as recent as Wednesday, 6th February, 2013 said that unless he is otherwise restricted by the court, he intends to proceed with the appointment of the other senators. And in particular he hopes to have at least one new senator in place shortly and that individual, whom he elected not to name, will serve as the Deputy Speaker of the House.

Two Convicted for Larceny Against Tourists