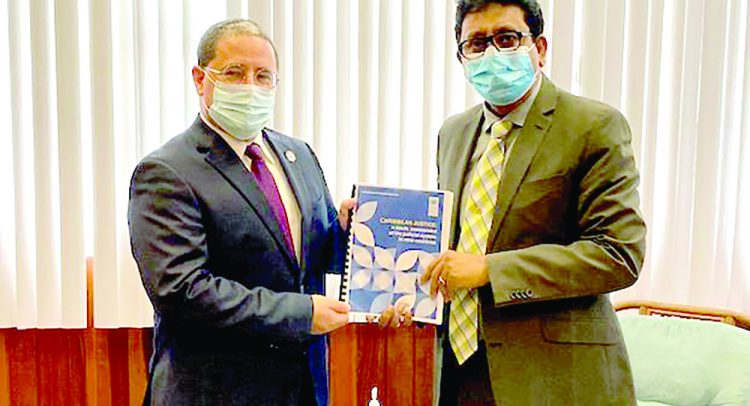 As the PPP/C Government pursues its reform agenda, it is likely to tap into technical assistance offered by the international community.

During his weekly programme ‘Issues in the News’, Attorney General and Legal Affairs Minister Anil Nandlall posited that the administration has committed to reviewing the Representation of the People Act (RPA) and other key pieces of legislation with the aim of reforming them in order to cover all the loopholes that have been exploited over the five months after the March 2 General and Region elections in Guyana.

To this end, he disclosed that the Canadian Government has laid out a multiplicity of opportunities in the legal sector for Guyana to take advantage of, and during a meeting with Canadian High Commissioner Lilian Chatterjee on Tuesday, he raised the need for experts to assist in the electoral reform process.

“I need as much technical assistance as I can get, and Canada has rendered significant support to our electoral process over the past few years. And the High Commissioner indicated her Government’s preparedness to continue to assist us in that regard,” Nandlall stated during the programme, which was also streamed live on this facebook page.

The Attorney General went on to outline some of the key areas that Government is looking to reform. These include: ensuring Statements of Poll (SoPs) are published by the respective political parties on a website, and made public within hours after receiving them; ensuring there are oversight mechanisms to scrutinise the work of the Returning Officers (RO) in order to guard against the declaration of false results; and also to scrutinise the employment procedures and practices at the Guyana Elections Commission (GECOM), so as to ensure the best quality candidates are recruited to work during elections, as well as to have fixed qualifications, character references and testimonials for high ranking staff at the electoral body.

Moreover, Nandlall highlighted that they are looking to implement a regime of offences that would carry heavy penalties for electoral wrongdoings, so that persons would be deterred from taking such actions during the elections.

Canada had joined the other members of the ABCE grouping to condemn blatant attempts to rig Guyana’s March 2, 2020 polls. The countries had spoken out extensively on the attempts to undermine democracy, and had repeatedly called on the David Granger-led APNU/AFC Coalition to respect the will of the Guyanese people after the then incumbent regime had refused to concede defeat and demit office.

In addition to Canada, several of Guyana’s other bilateral partners, including the United States, and India, have also indicated willingness to assist the country with its electoral reform agenda.

UNDP assistance
More recently, however, the United Nations Development Programme also informed Guyana of the extensive technical support the UNDP can offer on a myriad of various governance issues, including, but not limited to, strengthening of democracy, justice reform, and electoral reform.
This was done on Wednesday when UNDP Resident Representative Jairo Valverde met with AG Nandlall.

According to a missive from the Legal Affairs Ministry, Valverde commended President Irfaan Ali for committing to establishing a Commission of Inquiry (COI) to examine and investigate the events following the March 2, 2020 elections in Guyana, and offered to provide technical assistance and support to implement the recommendations for improvement and change that would be made to the electoral process after the conclusion of the COI.

During the engagement, Nandlall noted that while the need for wider constitutional reform garnered much attention as a result of the events that unfolded after the March 2020 election; and preceding that, with the 2018 No-Confidence Motion, equally desirable and important is constitutional compliance.

“One can have the best Constitution in the world, but if politicians blatantly refuse to comply with it, then society becomes dysfunctional,” the Attorney General contended.

Nevertheless, Valverde indicated that the UNDP has in excess of 8,000 technical persons deployed across the world assisting various governments in electoral reform and other key areas that require technical support in governance. He stated that the UNDP is, as a result, willing and capable of providing any assistance that the Government of Guyana would require upon request.

President Ali had first announced that Government would be launching a CoI into the events that unfolded post the March 2 polls, and during a recent interview with Jamaica’s CEEN TV – “The Conversation” – he revealed that the panel for the CoI could be drawn from the Caribbean Community (Caricom), the Organisation of American States (OAS), and the Commonwealth – all of whom had dispatched electoral observation missions in Guyana that witnessed the attempts to undermine democracy here.

The Head of State subsequently toldGuyana Times in an exclusive interview last week that there is great global interest in this probe, and as such, the international community would play a key role in the impending CoI, which he hinted could be held this year end.