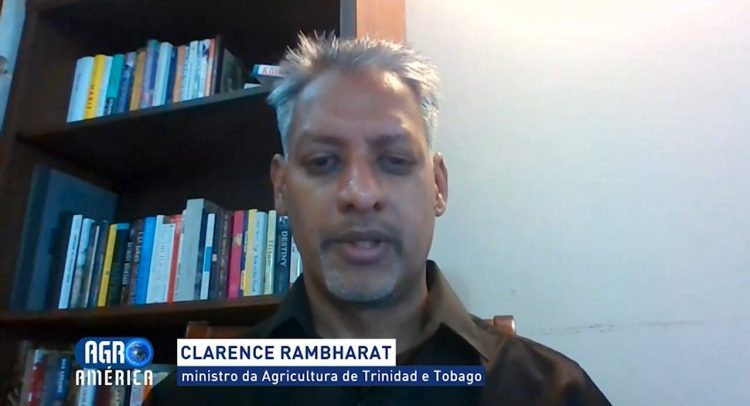 Brasilia, 6 April 2021 (IICA). During the pandemic, international cooperation has played a decisive role in guaranteeing food security in Trinidad and Tobago and other Caribbean countries, which have been particularly hard hit by the disruption in tourism, the region’s main source of income.

“The absence of tourists in the Caribbean has produced losses for farmers because tourists generate consumption and demand for agricultural products. Trinidad and Tobago also experienced a loss in income, due to the drop in the global energy demand and the resulting downturn in international energy prices”, said Clarence Rambharat, Trinidad and Tobago’s Minister of Agriculture, Land and Fisheries, speaking from Port of Spain, during an interview on Agro America, a program aired on Brazilian TV station, Agro Mais.

Rambharat emphasized the assistance that the Inter-American Institute for Cooperation on Agriculture (IICA) had given to strengthen technical cooperation among countries in the hemisphere, to accelerate the digital transformation of processes and to guarantee food distribution.

“With IICA’s intervention and support we were able to facilitate the release of shipments that could have been held up in different ports of the Caribbean, ensuring a continuous flow of goods to and from Trinidad and Tobago”, he reported, while also stressing the collaboration of the Institute in the distribution of seeds to families throughout the country, to encourage home and community farming.

“We were able to produce 50,000 packets with different types of seeds and to distribute them to families throughout the country. Each packet is enough to provide a 40-day supply of six essential vegetables. IICA assisted in the information process to instruct the families how to plant the seeds, maximize production and even to cook the vegetables. We are currently producing a second batch of seeds”.

Rambharat, a lawyer by profession, was born in the rural community of Rio Claro into a family that has traditionally been involved in agriculture in Trinidad and Tobago. In the interview, he recalled that his great grandparents had migrated to this country from India more than 150 years ago, having been hired to reap sugarcane.

“During that era, workers from India were also migrating to Guyana, Suriname and other parts of the Caribbean. Since that time, my family has been involved in agriculture. My father and all of my brothers pursued careers in this field. Many of them worked in the Ministry that I now head”, he explained.

The Minister stressed that family farming plays a central role in food security and economic development in Trinidad and Tobago and the entire region, indicating that, “Private investment is important, but we have to continue working closely with our original investors – the farming families, like mine, which have been cultivating the land for decades and earning their livelihoods from food production. This applies to the entire Caribbean and to Latin America. Some former small and medium-scale farmers have now become large-scale producers or have established major companies. However, in general, the heart of agriculture and investment in our countries continues to be the families that tend to their crops each week to put food on the table”.

In Trinidad and Tobago, we ensured that during the lockdown, restrictions did not prevent farmers from working in their fields and that we kept produce and farmers’ markets open.

Thus, we were able to ensure that fresh products were not affected and that prices did not rise significantly above traditional seasonal changes. According to the minister, the most difficult aspect for the authorities was maintaining the stability of the prices of imported processed foods.

He said that, “Our country depends of the importation of cereals, in particular wheat, but also corn, for animal feed. Due to the pandemic, we saw an increase in the price of cereals. This affected us, but we were able to manage the situation”.

Ramharat also offered his view on the outlook for agriculture post-Covid-19, stating that he felt that current actions would have to be reviewed in order to improve efficiency. “We cannot work in the same way, given the scarcity of resources. We will have to pinpoint 13 or 14 strategic objectives to feed our populations and to ensure our rural communities remain active, particularly women. A third important matter will be capacity development to prepare for agriculture in the future. There will be a need for investment in digital technology to facilitate the transformation that will enable better use of resources”.

Trinidad and Tobago, like the rest of the Caribbean, has suffered greatly from the effects of climate change, particularly due to its vulnerability to tropical storms and hurricanes that usually batter the region every year. Rambharat celebrated the fact that the country had not been affected by any of these extreme phenomena in 2020.

He remarked that, “By an incredible stroke of fortune, last year we did not have a combination of Covid-19 and tropical storms or hurricanes. In fact, the climate was excellent for agricultural production: a good mix of sun and rain. We had an extremely warm January to June season and then the rains came and remained until the end of December”.

Nonetheless, the minister acknowledged that the effects of climate change continue to pose a major threat. “Everyone who lives here will tell you that the rains are shorter but more abundant. Heavy rains over short periods in flood-prone areas—whether low-lying or on riverbanks—which the farmers prefer, pose serious risks. Changing weather patterns are also creating difficulties for the fisheries sector. There are more days with choppy seas, which prevent fisherfolk from going out to fish. Moreover, global warming and rising sea levels are causing coastal erosion, which has affected the fisheries infrastructure and lives of the fisherfolk living on the coast. Climate change has accelerated processes that were already underway and there is a need for investment in infrastructure and technology to develop protected agriculture, which can be adapted to weather conditions”.

Agro América is a program airing on the Brazilian TV station, Agro Mais, which is part of the Grupo Bandeirantes communication group. The program is a product of a partnership with the Inter-American Institute for Cooperation on Agriculture (IICA).

The program focuses on the current situation in the agriculture and rural sector of IICA member countries, with a view to promoting experience-sharing and a discussion about challenges and opportunities in Latin America and the Caribbean in the area of agricultural and rural development.

No more Royal Bank in St. Kitts - Bank of Nevis takes over