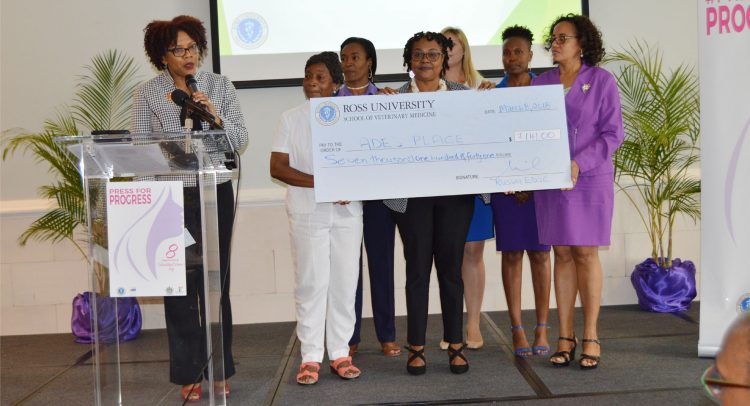 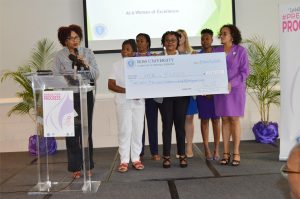 Basseterre, St. Kitts*, *March 14, 2018 (S.T.E.P.)* — Ade’s Place, a training institution based in Greenlands Basseterre that provides a safe and secure place for young persons who are ‘differently abled’ where they
can develop to their fullest potential, was on International Women’s Day the recipient of a generous donation courtesy of two corporate citizens.

Appropriately themed ‘Press for Progress’, International Women’s Day celebrations which were observed on Thursday March 8 saw the Ross University School of Veterinary Medicine EDGE (Empowerment
Diversity Growth Excellence) Chapter, in partnership with the Department of Gender Affairs, hosting a motivational breakfast whose proceeds were handed over to Ade’s Place, a charity that had been identified by the department.

But that was not all. RUSVM EDGE, which was created to accelerate the advancement of women working at Ross University School of Veterinary,Medicine while fostering a culture of diversity and overall inclusiveness, had approached Scotiabank to partner with them in raising funds for Ade’s Place, and an additional EC$2,000.00 was donated by the bank.

Ade’s Place Board Member Mrs Elizabeth Condell was on hand at the Royal St. Kitts Resort to receive the two cheques, the first one which was handed to her by RUSVM EDGE Champion Ms Cyndie Demming as the other EDGE Champions looked on. The second cheque was handed over by Mrs Fidela Haynes, Director, Scotiabank’s Anti-Money Laundering Compliance Programme Office – English Caribbean Region.

According to Ade’s Board Member Ms Clarice Cotton who oversees the daily operations at Ade’s Place, it all started in 2016 at the institution’s Open Day where the Acting Director of Gender Affairs Mrs Celia Christopher had attended and she asked them to list down some of the needs at Ade’s Place. That was done.

“Just two weeks ago I got a call from her to say somebody is going to give something, and she needed some background information which I sent to her,” said Ms Cotton. “But never in in my wildest dreams did I think it would be $9,000. I am so excited – I don’t know what to say.”

The money, Ms Cotton noted, would be used to complete one of their two projects. One is the sensory room where trainees can go if they are having a meltdown, if they are feeling sad, or if they feel like they want to have a tantrum. The room will be outfitted in such a way that when they go into that room it will calm them down. The other project is the computer room which will need computers.

“On behalf of Ade’s Place I would like to say a big thank you first of all to the Ross University for coming on board and helping out at Ade’s Place, and then to Scotiabank for their donation,” said Ms Cotton. “We have adults with disabilities coming here daily to learn independent living skills, and some of them to go out in the workplace in the near future, so we want to say a big thank you.”

The Bank of Nova Scotia, according to Mrs Fidela Haynes, Director, Anti-Money Laundering Compliance Programme Office – English Caribbean Region, has from a corporate standpoint the responsibility to give back to the society, and from time to time it identifies charities it wishes to raise funds for and support.

“It was an opportunity for us when approached by the Ross University to determine whether or not we would be able to partner with them,” commented Mrs Haynes. “Providing this type of support to the communities in which we operate was quickly embraced because we recognize that Ade’s Place is an institution that helps those persons who are not able to receive gainful employment.”

Australia on Rabada: 'His arm speed is quite amazing'

Matt Henry: Kent sign New Zealand fast bowler for the first half of the season