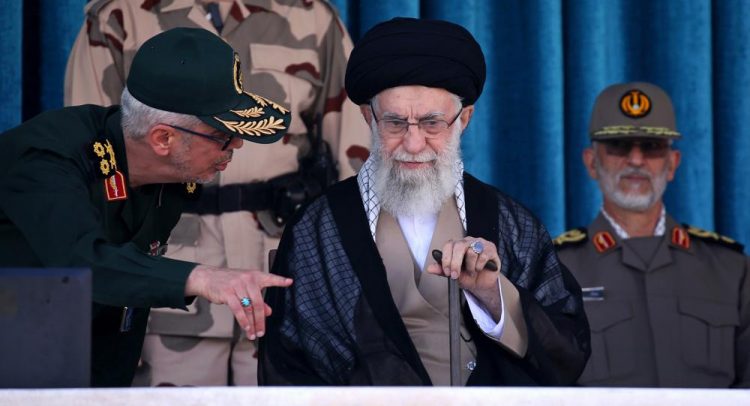 DUBAI, United Arab Emirates (AP) — Iran’s supreme leader Ayatollah Ali Khamenei responded publicly on Monday to the biggest protests in Iran in years, breaking weeks of silence to condemn what he called “rioting” and accuse the United States and Israel of planning the protests.

The unrest, ignited by the death of a young woman in the custody of Iran’s morality police, is flaring up across the country for a third week despite government efforts to crack down. On Monday, Iran shuttered its top technology university following an hours-long standoff between students and the police that turned the prestigious institution into the latest flashpoint of protests and ended with hundreds of young people arrested.

Speaking to a cadre of police students in Tehran, Khamenei said he was “heartbroken” by the death of 22-year-old Mahsa Amini in police custody, calling it a “sad incident.” However, he sharply condemned the protests as a foreign plot to destabilize Iran, echoing authorities’ previous comments.

“This rioting was planned,” he said. “These riots and insecurities were designed by America and the Zionist regime, and their employees.”

Meanwhile, Sharif University of Technology in Tehran announced that only doctoral students would be allowed on campus until further notice following hours of turmoil Sunday evening, when witnesses said antigovernment protesters clashed with hard-line pro-establishment students.

The witnesses, who spoke on condition of anonymity for fear of reprisals, said the police kept hundreds of students holed up on campus and fired rounds of tear gas to disperse the demonstrations. The university’s student association said that police and plainclothes officers surrounded the school from all sides and detained at least 300 students as protests rocked the campus after nightfall.

The state-run IRNA news agency sought to downplay the violent standoff, reporting a “protest gathering” took place and ended without casualties. But the violent crackdown drew condemnation even from the Jomhouri Eslami daily, a hard-line Iranian newspaper.

“Suppose we beat and arrest, is this the solution?” a column asked. “Suppose that is preventative. But will it be constructive?”

Iran’s latest protest movement, which has produced some of the nation’s most widespread unrest in years, emerged as a response to Amini’s death after her arrest for allegedly violating the country’s strict Islamic dress code. However, it has grown into an open challenge to the Iranian leadership, with chants of “Death to the dictator,” echoing from the streets and balconies after dark.

The demonstrations have tapped into a deep well of grievances in Iran, including the country’s social restrictions, political repression and ailing economy long strangled by American sanctions. Protests, with women burning their state-mandated headscarves and crowds chanting for the downfall of the ruling clerics, have continued in Tehran and far-flung provinces even as authorities have restricted internet access to the outside world and blocked social media apps.

In his remarks on Monday, Khamenei condemned scenes of protesters ripping off their hijabs and setting fire to mosques, banks and police cars as “actions that are not normal, that are unnatural.”

Security forces have responded with tear gas, metal pellets and in some cases live fire, according to rights groups and widely shared footage, although the scope of the crackdown remains unclear.

Iran’s state TV has reported the death toll from violent clashes between protesters and the security officers could be as high as 41. Rights groups have given higher death counts, with London-based Amnesty International saying it has identified 52 victims, including five women and at least five children.

An untold number of people have been apprehended, with local officials reporting at least 1,500 arrests. Security forces have picked up artists and activists who have voiced support for the protests, as well as dozens of journalists. Most recently on Sunday, authorities arrested Alborz Nezami, a reporter at an economic newspaper in Tehran.

Khamenei warned that that those who foment unrest to “sabotage” the country deserve “harsh prosecution and punishment.”

Young people who “come to the streets after excitement after watching something on the internet,” he added, should be “disciplined.”

Most of the protesters appear to be under age 25, according to witnesses — Iranians who have grown up with global isolation and severe Western sanctions linked to Iran’s nuclear program. Talks to revive the landmark 2015 nuclear deal have stalled for months, fueling public discontent as Iran’s currency declines in value and prices soar.

A Tehran-based university teacher, Shahindokht Kharazmi, said the new generation has come up with new and unpredictable ways to defy authorities.

“The (young protesters) have learned the strategy from video games and play to win,” Kharazmi told the pro-reform Etemad newspaper. “There is no such thing as defeat for them.”

As the new academic year began this week, students gathered in protest at universities across Iran, according to videos widely shared on social media, chanting slogans against the government and denouncing security forces’ clampdown on demonstrators.

The eruption of student anger has worried the Islamic Republic since at least 1999, when security forces and supporters of hard-line clerics attacked students protesting media restrictions. That wave of student protests under former reformist President Mohammad Khatami touched off the worst street battles since the 1979 Islamic Revolution.

This week, universities in major cities including Isfahan in central Iran, Mashhad in the northeast and Kermanshah in the west have held protests featuring crowds of students clapping, chanting and burning headscarves.

“Don’t call it a protest, it’s a revolution now,” shouted students at Shahid Beheshti University in Tehran, as women waved their hijabs and set them alight, in protest over Iran’s law requiring women to cover their hair.

“Students are awake, they hate the leadership!” chanted crowds at the University of Mazandaran in the north.

Police have been out in force, patrolling streets near universities on motorbikes.

Photo: In this picture released by the official website of the office of the Iranian supreme leader, Supreme Leader Ayatollah Ali Khamenei, center, listens to chief of the General Staff of the Armed Forces Gen. Mohammad Hossein Bagheri at a graduation ceremony for a group of armed forces cadets at the police academy in Tehran, Iran, Monday, Oct. 3, 2022. Khamenei responded publicly on Monday to the biggest protests in Iran in years, breaking weeks of silence to condemn what he called “rioting” and accuse the U.S. and Israel of planning the protests. (Office of the Iranian Supreme Leader via AP)