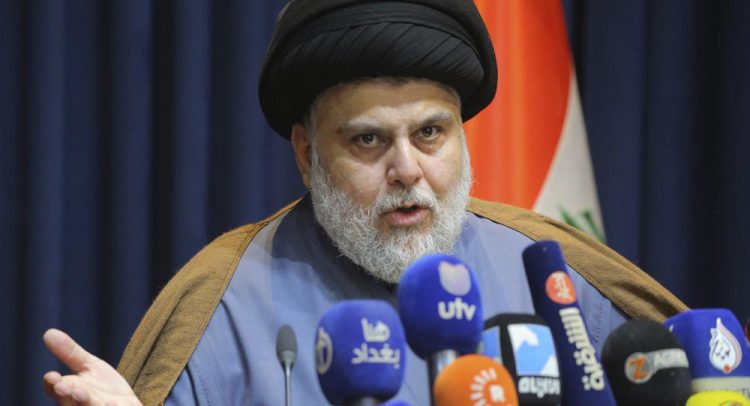 BAGHDAD (AP) — Iraqi leaders vowed Monday to move forward with efforts to form a government following the shocking resignation of 73 lawmakers from parliament during a prolonged political impasse.

It is a huge gamble by al-Sadr, one of the most influential politicians in Iraq with a large street following, leaving his political movement out of parliament for the first time since 2005.

The surprise move is an attempt to break a persistent political impasse eight months after general elections were held.

Al-Sadr emerged as the winner of the October vote, giving him 73 out of Parliament’s 329 seats. It was also a blow for his Iran-backed Shiite rivals who lost about two-thirds of their seats and have rejected the results.

Since then, the two sides have been locked in a cutthroat competition for power, even as the country faces growing challenges including an impending food crisis resulting from severe drought and the war in Ukraine.

Al-Sadr had been intent on forming, along with his allies, a majority government that excludes the Iran-backed factions. But he has not been able to corral enough lawmakers to get the two-thirds majority needed to elect Iraq’s next president — a necessary step ahead of naming the next prime minister and selecting a Cabinet.

On Sunday, he ordered his lawmakers to resign calling it a “sacrifice” he was making for the good of the country. His cousin and nominee for prime minister, Jaafar al-Sadr, withdrew his candidacy Monday.

“Muqtada’s withdrawal bolsters his political position, and will help him win the sympathy of the disenchanted Iraqi street fed up with politicians and the political process,” said political analyst Ihsan al-Shammari.

“He knows there’s going to be protests in the street, and this will open communication channels with the protesters, making him the only survivor,” he added.

The question now is whether the political parties will be able to form a government with al-Sadr in the opposition.

With the resignation of Sadrist lawmakers, Iranian-backed groups are now expected to hold the majority in parliament.

According to Iraqi law, if a seat in parliament becomes vacant, the candidate who obtained the second highest number of votes in the district takes the seat. In this case, it would be al-Sadr’s opponents from the so-called Coordination Framework, a coalition led by Iran-backed Shiite parties and their allies.

“Any government in which Muqtada does not participate will be stillborn,” Shammari said. He also questioned whether the Iran-backed parties would be able and willing to negotiate with Kurdish Democratic Party leader Masoud Barzani, with whom there is mutual and deep-seated distrust.

The election was held several months earlier than expected, in response to mass protests that broke out in late 2019 that saw tens of thousands rally against endemic corruption, poor services and unemployment.

Parliament Speaker Mohammed Halbousi said Monday that government formation efforts will continue based on certain “other political understandings,” without elaborating.

A Shiite politician said he expected the political process to go ahead with the Coordination Framework, which will have more than 100 seats after al-Sadr’s withdrawal, seeking to form the next government.

“Negotiations will proceed with the other Sunni and Kurdish blocs,” he said, speaking on condition of anonymity because he was not authorized to give official statements.

He said the next government may face protests or disturbances in the street, especially from followers of al-Sadr, and its success would depend on the government’s ability to manage it.

A member of parliament from the Coordination Framework who refused to be named admitted they were baffled by al-Sadr’s withdrawal.

“We do not know yet the motives behind Muqtada’s withdrawal. … This was a surprise for all of us,” he said. The lawmaker pointed out that the resignations took place while parliament was in recess and that there could still be new developments.

“We have a month for parliament to return and everything is possible in this month,” he said.

Inside the Finals: Celtics fit to be tied, Steph raining 3s