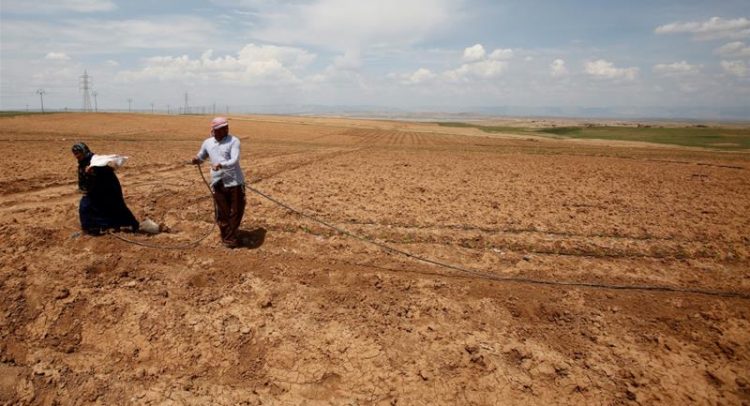 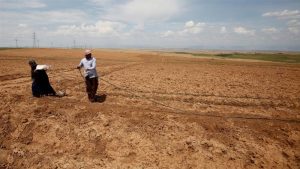 The canals branching out of the Tigris river and into the adjoining farmlands are empty and dry. Devoid of water, the rice, wheat and barley fields are left without vegetation. The Tigris today is far shallower than it was a year ago, and for farmers in Iraq, this is a catastrophe.

Omar Di’ibil, 35, has been a farmer in Radwaniya, on the outskirts of the capital, Baghdad, all his life – just like his father and grandfather were before him.

Like many others across the country, this year’s crippling water shortage has left him able to grow just a few hectares of wheat and barley. Soon, he says, there won’t be enough water to grow a single one on his once-fertile lands.

Increasingly erratic rainfall across the region, along with the construction of dams in upstream Turkey and Iran, have all reduced the amount of water flowing in the key Iraqi rivers of the Tigris and Euphrates by at least 50 percent in recent decades, according to government officials. This has hit Iraq’s agricultural and farming sectors hard.

The prolonged reduction of water levels in rivers slashes electricity generation from hydroelectric dams, which, in turn, affects the water supply for agriculture and eventually forces the country to import more food than it already does.

According to Zafer Abdullah, an adviser to Iraq’s Ministry of Water Resources, a particularly dry season and adverse regional water policies have left “Iraq with only enough water to irrigate half of its farmland this summer”.

Consequently, the government has now banned the plantation of summer crops, including corn and paddy rice cultivation. According to official estimates, one in five Iraqis are farmers. The depleting water levels in rivers have led to a big slash to both their production and income.

“Our lands have become arid and empty [of vegetation],” laments Di’ibil. The increasingly dry seasons have not only resulted in reduced rainfall, but also made the water that is available salty and unsuitable for farming.

“Water from the Tigris would flood our lands years ago. Then we used to pump the fresh water. But now we are having to use wells, and even they are becoming dry and salty,” says Di’ibil.

When water levels are down, a phenomenon known as salt tide appears, where the lower course of a river, with its low altitude with respect to sea level, becomes salty. If dry seasons are prolonged, this phenomenon becomes harder to overcome, leaving farmers helpless and searching elsewhere for income. Abdel Rahman al-Mashhadani, an Iraqi economic expert, says a large number of people have migrated from rural areas to the cities as a result of the water shortages.

“Our urban areas are imploding and unemployment is on the rise,” he says.

Amid the worsening situation, many in recent years have been forced to find another job to supplement their income. One of them is 23-year-old Abdelrahman Mansour, also from Radwaniya. He says he was left with no choice but to abandon farming and become a construction worker.

“We tried to keep our farms alive and well, but the salt water has killed everything,” says Mansour, who used to grow various kinds of grains on a 50-hectare plot of land.

“Now half of the farmers in our area have left the industry.” Di’ibil agrees.

“Our livelihoods were always dependent on farming. Now, so many of us are becoming employees in the police or for the government,” says Di’ibil, who for the past two years has been mostly working for the state.

Rice, especially the Anbar variety which is particular to the country and known for its distinct aroma, is an important commodity in Iraq. But without sufficient water, production levels are being reduced this year.

According to Abdullah, the ministry adviser, the levels of water needed by the sector in previous years are no longer available.

But in a bid to ensure that this popular strain of rice does not become extinct, Iraq has limited the number of hectares it will grow this year to the bare minimum.

“The ministry restricted paddy rice cultivation to only 5,000 hectares. Last year, we planted 270,000 hectares of paddy rice instead,” said Abdullah.

This is a reflection of the wider situation when it comes to Iraq’s food production and security.

Although the country has been importing most of its wheat and other basic foodstuffs for years, the continued loss of grain production means an increased need for imports to satisfy demand, according to experts.

“Since 2010, we worked on producing our own rice and wheat so that we can reduce our imports, which went down from 3.5 million tonnes to 2.5,” says Mashhadani, the economist.

“But we’ve already gone back to importing more foodstuffs.”

In addition to water shortages, food production in Iraq has been affected by ISIL’s 2014 takeover of Salahuddin, Nineveh, Kirkuk, and Anbar – areas that comprise the country’s cereal belt.

The lack of this territory resulted in Iraq losing the majority of its annual wheat and barley harvests from those regions, which contribute more than one-third of Iraq’s cereal production, or about one million tonnes of wheat, according to reports.

Turkey and Iran are already holding back water from the Tigris and Euphrates to feed their growing population in a warming climate. Unless new deals are reached, this situation will only get worse, especially after Turkey began holding back water behind its Ilisu Dam on July 1, say officials.

“The impacts of this dam (Ilisu) are still under way. We are expecting to feel them quite strongly in the very near future,” says Abdullah.