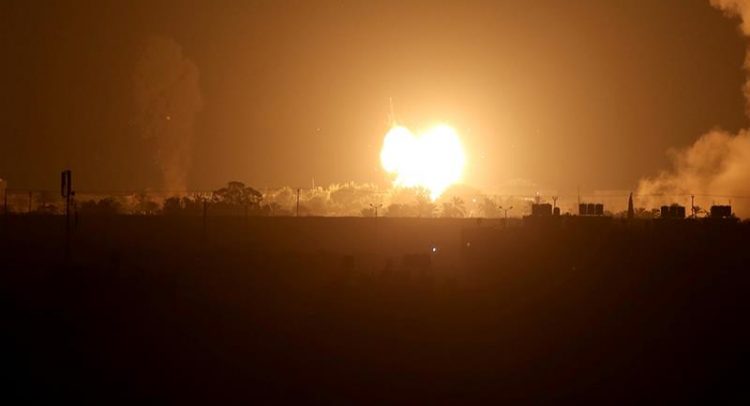 The Israeli military carried out a series of air raids on the besieged Gaza Strip on Wednesday after rockets were fired into Israel during a “normalisation” of ties signing ceremony with the United Arab Emirates and Bahrain in the United States.

According to Wafa, the official Palestinian news agency, Israeli warplanes fired missiles at a site in Beit Lahiya in the northern strip. They also targeted areas in Deir al-Balah, a city in central Gaza, as well as parts of Khan Younis in southern Gaza. No casualties were reported.

By Wednesday morning, 15 rockets had been fired into Israel wounding two people, according to the military.

Hamas, the group that governs the Gaza Strip, warned Israel it “will pay the price for any aggression against our people or resistance sites and the response will be direct”.

“We will increase and expand our response to the extent that the occupation persists in its aggression,” it said in a statement.

Without naming specific factions, the Palestinian Islamic Jihad group in Gaza said in response to the Israeli air raids, the “resistance” fired rocket salvoes at Israel.

Earlier on Wednesday, the Israeli army in a statement said it carried out 10 air strikes against positions belonging to Hamas in response to rockets being fired into Israel.

The rockets were fired at the same time as Israel, the United Arab Emirates, and Bahrain signed agreements at the White House in Washington to establish diplomatic relations.

Palestinians, who seek an independent state that includes the illegally occupied West Bank and Gaza, view the US-brokered deals as a betrayal of their cause.

The latest rocket fire from Gaza came after a month of armed groups in the strip stepping up incendiary balloon attacks against Israel, which responded with nighttime air raids against Hamas.

Since 2008, Israel has waged three wars on the Gaza Strip. Israel has long said it holds Hamas responsible for all violence from Gaza, while Hamas says Israel is responsible for the state of anger and pressure inflicted on Gaza’s residents because of the continued siege.

Since 2007 Israel has imposed a crippling blockade on Gaza’s two million residents. The Gaza Strip has a population of two million, more than half of whom live in poverty, according to the World Bank.