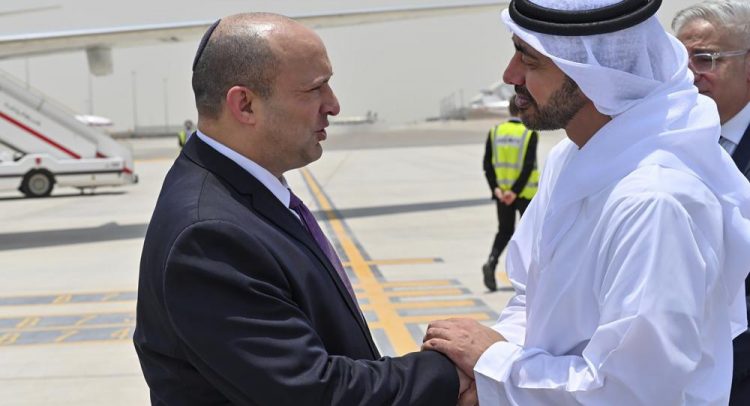 TEL AVIV, Israel (AP) — Israeli Prime Minister Naftali Bennett made a surprise visit to the United Arab Emirates on Thursday, with the snap trip coming as efforts to salvage a deal over Iran’s nuclear program are stalled in a deepening standoff with Tehran.

The visit was Bennett’s second public trip to Abu Dhabi since Israel and the UAE agreed to normalize ties in 2020 after years of quiet cooperation, mainly over their shared concerns over Iran’s nuclear capabilities.

The Israeli leader met with the UAE’s president, Sheikh Mohammed bin Zayed Al Nahyan, and the two discussed “advancing the regional architecture” and other undisclosed regional affairs, Bennett’s office said in a statement. Iran was likely to top the agenda.

In a video statement before departing, Bennett commended countries at an International Atomic Energy Agency meeting in Vienna on Wednesday that voted to censure Iran over its lack of transparency about nuclear activities at three undeclared sites in the country.

“We see here a firm stance by the countries of the world regarding the distinction between good and evil, as they clearly state that Iran is concealing things. We will not let up on this issue,” he said.

Israel considers Iran to be its greatest enemy and it strongly opposed the 2015 deal between Iran and world powers, which eased economic sanctions in exchange for curbs on Iran’s nuclear activities.

Israel says it wants an improved deal that places tighter restrictions on Iran’s nuclear program and addresses Iran’s long-range missile program and its support for hostile proxies along Israel’s borders. Israel also says the negotiations must be accompanied by a “credible” military threat to ensure that Iran does not delay indefinitely.

In 2018, then-President Donald Trump unilaterally withdrew America from the accord, raising tensions across the wider Middle East and sparking a series of attacks and incidents. The withdrawal caused the deal to quickly unravel.

Talks in Vienna over Iran’s tattered nuclear deal have been stalled since April. Since the deal’s collapse, Iran has been running advanced centrifuges, and has a rapidly growing stockpile of enriched uranium. Israeli leaders have claimed Iran is just weeks away from accumulating enough enriched uranium to produce a nuclear weapon, though other components of a bomb are believed to be months or years away.

Iran insists its program is for peaceful purposes, though U.N. experts and Western intelligence agencies say Iran had an organized military nuclear program through 2003.

Israel and the UAE agreed to thaw ties under the U.S. brokered agreements known as the “Abraham Accords,” which saw similar deals struck with Bahrain, Morocco and Sudan. Since then, Israel and the UAE have deepened ties in tourism and trade, to the dismay of the Palestinians who long relied on an Arab wall of support to serve as leverage against Israel.

Bennett’s trip comes as Israel is on the cusp of another political crisis, with members of his fragile coalition threatening to bolt unless the government can pass a law over the legal status of its West Bank settlers.

No way out as Iraq’s dangerous post-election impasse deepens