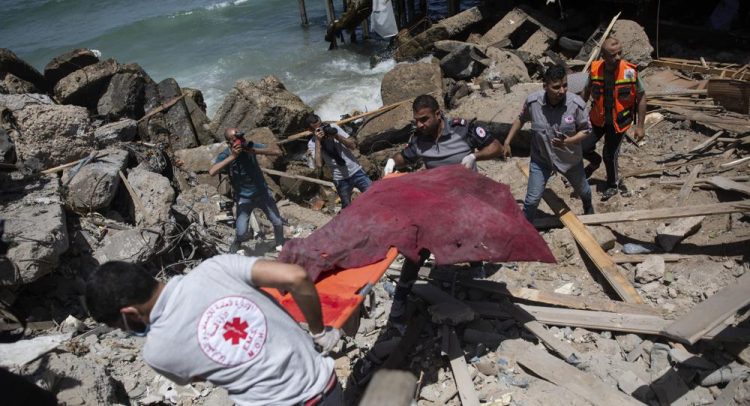 GAZA CITY, Gaza Strip (AP) — The Israeli military unleashed a wave of heavy airstrikes on the Gaza Strip early Monday, saying it destroyed 15 kilometers (9 miles) of militant tunnels and the homes of nine Hamas commanders, as international diplomats worked to end the week of fighting that has killed hundreds of people.

The latest attacks killed a local Gaza leader of the Islamic Jihad militant group, according to the Israeli military, which blamed him for some of the thousands of rocket attacks launched at Israel.

Residents of Gaza awakened by the overnight barrage described it as the heaviest since the war began, even more powerful than a wave of airstrikes in Gaza City the day before that left 42 dead and flattened three buildings. That earlier attack was the deadliest in the current round of hostilities between Israel and Gaza’s Hamas rulers.

A three-story building in Gaza City was heavily damaged, but residents said the military warned them 10 minutes before the strike and everyone cleared out. There was no immediate word on casualties.

Gaza’s mayor, Yahya Sarraj, told Al-Jazeera TV that the strikes had caused extensive damage to roads and other infrastructure. “If the aggression continues we expect conditions to become worse,” he said.

The U.N. has warned that the territory’s sole power station is at risk of running out of fuel, and Sarraj said Gaza was also low on spare parts. Gaza already experiences daily power outages for between eight and 12 hours, and tap water is undrinkable. Mohammed Thabet, a spokesman for the the territory’s electricity distribution company, said it has fuel to supply Gaza with electricity for two or three days. Airstrikes have damaged supply lines and the company’s staff cannot reach areas that were hit because of continued Israeli shelling, he added.

The war broke out last Monday, when the Hamas militant group fired long-range rockets at Jerusalem after weeks of clashes in the holy city between Palestinian protesters and Israeli police. The protests were focused on the heavy-handed policing of a flashpoint sacred site during the Muslim holy month of Ramadan and the threatened eviction of dozens of Palestinian families by Jewish settlers.

More protests were expected across the region Tuesday in response to a call by Palestinian citizens of Israel for a general strike. The protest has the support of Palestinian Authority President Mahmoud Abbas’ Fatah party.

Since the fighting began, the Israeli military has launched hundreds of airstrikes it says are targeting Hamas’ militant infrastructure. Palestinian militants in Gaza have fired more than 3,100 rockets into Israel. Israeli military officials said Hamas had stockpiled about 15,000 rockets before the war started.

Despite international efforts at a cease-fire, Israeli Prime Minister Benjamin Netanyahu said Sunday that Israel’s attacks were continuing at “full-force” and would “take time.“ Israel “wants to levy a heavy price” on the Hamas militant group, he said.

Hamas’ top leader Ismail Haniyeh, who is based abroad, said the group has been contacted by the United Nations, Russia, Egypt and Qatar as part of cease-fire efforts but “will not accept a solution that is not up to the sacrifices of the Palestinian people.”

In an interview with the Lebanese daily Al-Akhbar, he blamed the war on Israel’s actions in Jerusalem and boasted that the rockets were “paralyzing the usurping entity (Israel) by imposing a curfew on its citizens and closing its airports and ports.”

Egyptian President Abdel Fattah el-Sissi said his government is working to “urgently” end the violence, in his first comments since the war broke out. Egypt, which borders Gaza and Israel, has played a central role in the cease-fires brokered after previous rounds of fighting.

An Egyptian diplomat said the efforts were focusing on two issues — a halt in all attacks from both sides and halting Israeli policies in the contested city of Jerusalem that helped spark the fighting. These include police raids against Palestinian protesters in and around the Al-Aqsa Mosque and the planned evictions of Palestinians by Jewish settlers in east Jerusalem.

The diplomat, speaking on condition of anonymity because he was talking about confidential diplomatic discussions, said mediators were counting on the Biden administration to put pressure on Israel to stop its offensive and there were expectations for action in the coming 48 hours.

U.S. diplomat Hady Amr met with a delegation from the Palestinian Authority on Monday, a day after meeting senior Israeli leaders. But the Biden administration has declined so far to publicly criticize Israel’s part in the fighting or send a top-level envoy to the region.

Rocket attacks continued Monday, with one hitting a building in the city of Ashdod that caused injuries, the Israeli police said.

The Israeli military, meanwhile, said it struck 35 “terror targets” Monday as well as the tunnels, which it says are part of an elaborate system it refers to as the “Metro,” used by fighters to take cover from airstrikes.

The tunnels extend for hundreds of kilometers (miles), with some more than 20 meters (yards) deep, according to an Israeli Air Force official who spoke to reporters on condition of anonymity, in keeping with regulations. The official said Israel was not trying to destroy all the tunnels, just chokepoints and major junctions.

The military also said it struck nine houses in different parts of northern Gaza that belonged to “high-ranking commanders” in Hamas. It said a strike killed Hasam Abu Harbid, a Gaza commander for Islamic Jihad.

In recent days, Israel has targeted the homes of a number of senior Hamas leaders, including Yehiyeh Sinwar, the top leader inside the territory. The group’s leadership goes underground when the fighting begins, and it’s unlikely any were at home at the time of the strikes.

Hamas and the Islamic Jihad militant group say at least 20 of their fighters have been killed, while Israel says the number is at least 130 and has released the names of and photos of more than two dozen militant commanders it says were “eliminated.”

Israel’s airstrikes have leveled a number of Gaza City’s tallest buildings, which Israel alleges contained Hamas military infrastructure. Among them was the building housing The Associated Press Gaza office and those of other media outlets. The Israeli military alerted staff and residents before the strike, and all were able to evacuate safely.

Sally Buzbee, the AP’s executive editor, has called for an independent investigation into the airstrike.

Netanyahu alleged that Hamas military intelligence was operating inside the building and said Sunday any evidence would be shared through intelligence channels. Neither the White House nor the State Department would say if any had been seen.

This story has been updated to correct that Hamas leader Ismail Haniyeh said the group has been contacted by the United Nations, not the United States.

Palestinian rescue workers carry the remains of a man found next to a beachside cafe after it was hit by an Israeli airstrike, in Gaza City, Monday, May 17, 2021. (AP Photo/Khalil Hamra)