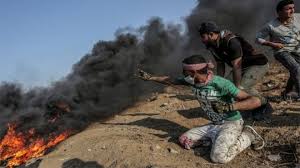 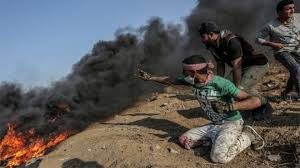 Zeid Raad Al Hussein told a meeting in Geneva that Gazans were effectively “caged in a toxic slum” and Gaza’s occupation by Israel had to end.

The UN meeting is considering calling for an independent investigation.

Some 60 Palestinians were killed by Israeli forces on Monday in the seventh consecutive week of border protests, largely orchestrated by Hamas, which politically controls the Gaza Strip.

It was the deadliest day in Gaza since a 2014 war between Israel and militants there.

The protests had been dubbed the Great March of Return, in support of the declared right of Palestinian refugees to return to land they or their ancestors fled from or were forced to leave in the war which followed Israel’s founding in 1948.

The Israeli government, which has long ruled out a mass return of Palestinians, said terrorists wanted to use the protests as cover to cross into its territory and carry out attacks.

Mr Zeid told the emergency session on Gaza that the “stark contrast in casualties on both sides is… suggestive of a wholly disproportionate response” by Israel.

He said there had been “little evidence of any [Israeli] attempt to minimise casualties”. Israel’s actions might, he said, “constitute ‘wilful killings’ – a grave breach of the Fourth Geneva Convention”, an international law designed to protect civilians under occupation.

Mr Zeid said he supported a call for an “international, independent and impartial” investigation into the violence in Gaza, adding that “those responsible for violations must in the end be held accountable”.

“End the occupation, and the violence and insecurity will largely disappear.”

Israel occupied Gaza in the 1967 Middle East war. Although it withdrew its forces and settlers in 2005, the UN still considers the territory occupied because Israel retains control over the territory’s air space, coastal waters and shared border.