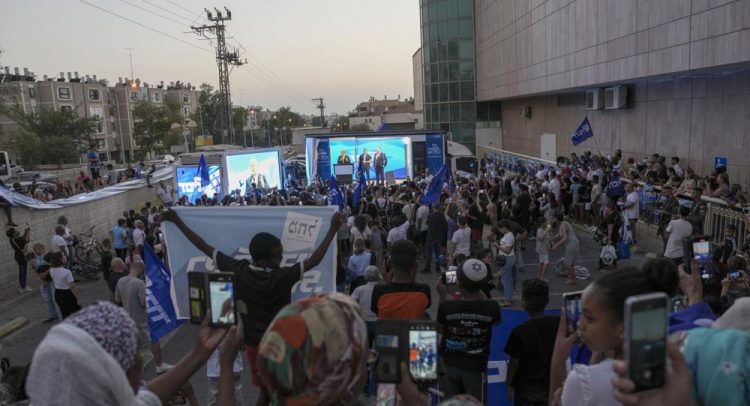 BEERSHEBA, Israel (AP) — Props are a familiar part of Benjamin Netanyahu’s repertoire when delivering public speeches — from cartoon bombs at the United Nations to a wall of CDs and binders supposedly seized from Iran by Mossad agents.

Now, the former prime minister — famed for his flair for the dramatic — is hitting the campaign trail with a new shtick. Behold: the Bibibus.

The bizarre bulletproof vehicle is part popemobile, part movie set and 100% vintage Netanyahu. As Israel heads to the polls for the fifth time in under four years, the veteran politician is using the Bibibus to attract passionate crowds of supporters and once again make himself the focus of attention among a weary electorate.

At a rally in the southern city of Beersheba on Tuesday, Netanyahu addressed a crowd of around 200 people in a mall parking lot. Flanked by his former finance minister, he spoke at a podium from the back of the modified delivery truck. Its side wall had been replaced with bulletproof glass, and its air-conditioned interior was backlit with an enormous LED screen projecting the logo of his Likud party over a fluttering Israeli flag.

Netanyahu does not actually ride in the vehicle. Instead, it serves as a mobile stage that is moved from city to city to serve as the backdrop for his campaign appearances.

Commentators have variously dubbed it the “aquarium truck,” the “Bibimobile” and the “Bibibus” — riffing on Netanyahu’s nickname. The Likud promotes the mobile rallies as “Bibiba,” or “Bibi is coming,” and says the truck is a necessary security precaution.

“I have to stand here, unfortunately,” he told the crowd, tapping his hand against the glass separating him from the throngs of cheering supporters before delivering pledges to combat rising costs of living and inflation.

The Likud says the vehicle and its bulletproof glass were adopted to comply with safety measures required by the Shin Bet, Israel’s internal security agency.

But there may be more to the story. No other politicians have adopted similar protocols, and the bus is not entirely fortified. The bulletproof glass appears to cover only part of the vehicle, and when he spoke at the podium, a window was open and Netanyahu was exposed to the crowd. Netanyahu has also in the past repeatedly appeared at crowded markets and malls with no such protection. The agency did not respond to a request for comment.

Israel is holding parliamentary elections on Nov. 1, the fifth since the beginning of a protracted political crisis in early 2019. Like the other four, the upcoming vote will largely be a referendum on Netanyahu’s fitness to rule, and he could once again fail to form a durable coalition even if his party gets the most votes.

Netanyahu, who led the country from 2009 until last year, has been charged with fraud, breach of trust and accepting bribes in three different cases, and his high-profile trial has been dragging on for over two years. He has denied any wrongdoing and has lashed out against law enforcement and the courts, accusing them of conducting a politically motivated witch-hunt.

Netanyahu remains the country’s most popular politician, and his supporters adore him with cult-like reverence. But the corruption allegations have deeply divided Israelis, and last year he was driven from office for the first time in 12 years by an unwieldy coalition united in large part by its opposition to his continued rule.

That coalition collapsed in June, triggering new elections and raising the possibility of Netanyahu’s return to power after a year in the wilderness as opposition leader.

The former prime minister, who turns 73 next month, remains a tireless campaigner and has near-daily whistle stops, holding campaign rallies from the back of the Bibibus.

The bulletproof glass hasn’t protected Netanyahu from critics, who regard the Bibibus as another symbol of his disconnection from ordinary Israelis. Israeli public broadcaster Kan reported that the truck rental for two months of campaigning cost the Likud party 700,000 shekels ($200,000), a massive expense at a time when many are tightening their belts.

One of Likud’s main rivals, the Machane Mamlachti party, released a video mocking Netanyahu, contrasting his appearance behind glass with a clip of its leader, Defense Minister Benny Gantz, surrounded by a crowd of supporters. Ben Caspit, an Israeli columnist and longtime Netanyahu critic, has called the Bibibus “grotesque” and “a strange mistake.”

In the face of criticism, Netanyahu has doubled down and embraced the Bibibus. Likud released a campaign video with the former leader stepping dramatically out of the truck cab and wiping clean its enormous glass panes.

“No bulletproof glass will separate my heart from yours,” the beaming former leader says.

Photo: Former Israeli Prime Minister Benjamin Netanyahu delivers an election campaign speech from inside a modified delivery truck with a side wall replaced with bulletproof glass, in Beersheba, southern Israel, Tuesday, Sept. 13, 2022. As he hits the campaign trail for the fifth time in less than four years, Netanyahu is addressing supporters from the strange new vehicle dubbed the “Bibibus” after his popular nickname. (AP Photo/Ariel Schalit)