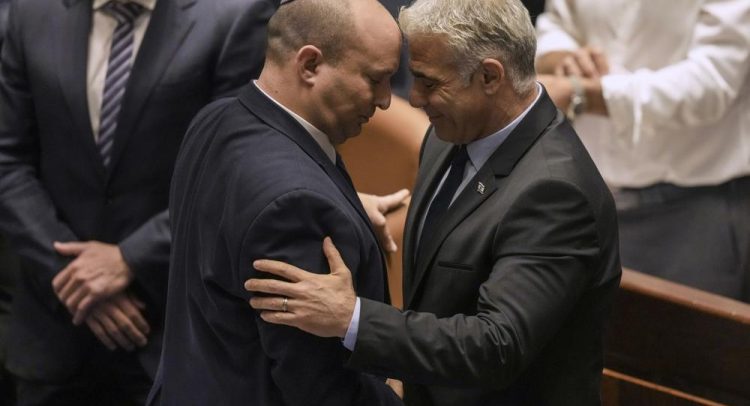 JERUSALEM (AP) — Israel’s parliament voted Thursday to dissolve itself, marking the end of a year-old experimental coalition government, and sending the country to the polls in November for the fifth time in less than four years.

Yair Lapid, Israel’s foreign minister and architect of the outgoing coalition government, will become the country’s caretaker prime minister just after midnight on Friday. He will be the 14th person to hold that office, taking over from Naftali Bennett, Israel’s shortest serving prime minister.

Following the vote, Lapid embraced Bennett before the two swapped chairs. He posted, “thanks, Naftali, my brother” on Twitter.

The government collapsed just over a year after it was formed in a historic move that saw longtime leader Benjamin Netanyahu ousted after 12 years in power by a coalition of ideologically diverse parties, the first to include an Arab faction.

The motion to dissolve passed with 92 lawmakers in favor, and none against, after days of bickering by coalition and opposition lawmakers over the date of new elections and other last-minute legislation.

New elections will be held on Nov. 1.

The move brings a formal end to a political experiment in which eight parties from across the Israeli spectrum tried to find common ground after a period of prolonged gridlock in which the country held four elections in two years.

The upcoming elections are an extension of Israel’s protracted political crisis, at the heart of which sits Netanyahu and his ongoing corruption trial. The four deadlocked elections in the previous three years were largely referendums on Netanyahu’s fitness to serve while facing charges of accepting bribes, fraud and breach of trust. Netanyahu has denied any wrongdoing.

Lapid, a former talk-show host who heads a center-left party, is expected to campaign as caretaker prime minister to keep the job as the main alternative to Netanyahu, and will likely get an early boost when he welcomes President Joe Biden to the country next week.

Polls by Israeli media show Netanyahu and his allies are projected to gain seats, although it is unclear whether they would have enough to form a 61-seat majority in the 120-member Knesset. If neither he nor anyone else succeeds in doing so, Israel could go to elections yet again.

On Wednesday, Bennett said he would be taking a hiatus from politics and would not be running in the upcoming elections. His Yamina party was riven by infighting and splintered following the formation of the government last year as its members broke away in protest of what they considered Bennett’s excessive compromises to more liberal coalition allies.

The death blow came earlier this month, when the government failed to renew an emergency law that preserves the special legal status of Jewish settlers in the occupied West Bank, legislation that most Israelis view as essential. Because the Knesset was dissolved before the end of the month, the emergency law is automatically renewed until after the formation of a new government.

“They promised change, they spoke about healing, they tried an experiment, and the experiment failed,” Netanyahu said in an address to parliament ahead of the vote. “We are the only alternative: a strong, stable, responsible nationalist government.”

The outgoing governing coalition made history by being the first to include an Arab party. Mansour Abbas, leader of the Islamist Ra’am faction, joined the coalition to secure better services and more government funding for Israel’s Arab minority, which makes up some 20% of the population.

Netanyahu and his allies accused coalition members of partnering with terrorist sympathizers. His allies have provided little evidence to back those claims, citing only Abbas’ Islamist roots, and Netanyahu himself also reportedly courted the party after the previous election last year.

Israel’s Arab citizens face widespread discrimination and are seen by many Jewish Israelis as a fifth column because they have close family ties to Palestinians in the occupied West Bank and Gaza, and largely support their struggle for independence.

Joseph Krauss contributed to this report.