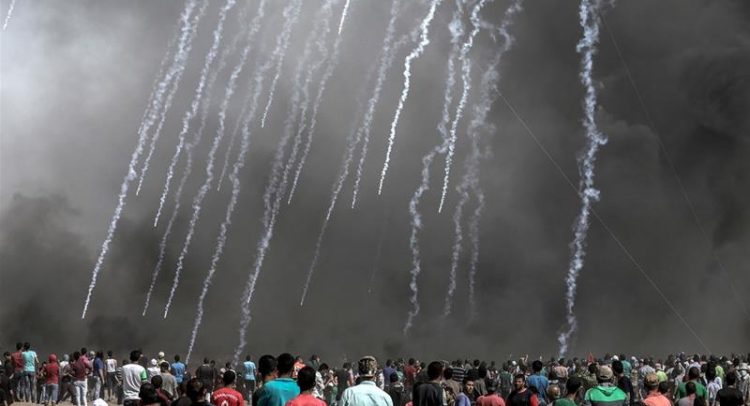 Israel’s use of lethal force ‘could amount to war crime’ Israel’s use of lethal force against Palestinian protestors along the Gaza strip border in recent weeks could amount to war crimes, Human Rights Watch said on Wednesday.

“Israel’s use of lethal force when there was no imminent threat to life has taken a heavy toll in life and limb,” said Sarah Leah Whitson, Middle East director at Human Rights Watch.

“The international community needs to rip up the old playbook, where Israel conducts investigations that mainly whitewash the conduct of its troops and the US blocks international accountability with its Security Council Veto, and instead impose real costs for such blatant disregard for Palestinian lives.”

Palestinians in the besieged coastal enclave have been staging week-long protests demanding their right to return to the homes and lands their families were expelled from 70 years ago.

Since the protests began on March 30, Israeli forces have killed 124 Palestinian and wounded more than 3,800 others.

At least 40 Palestinians have had to have their limbs amputated as a result of Israel’s actions along the Gaza border, according to the rights group.

Israeli authorities allege that its soldiers were acting in self-defense and had adhered to rules of engagement to deter protestors from breaching the fence.

In a controversial ruling, Israel’s top court deemed earlier in May the military’s rules of engagement – and the use of live ammunition – compatible with domestic and international law, arguing that the protests fall into the category of a state of war.

The report came ahead of an emergency UN General Assembly meeting on Wednesday to vote on a resolution condemning Israel’s “excessive use of force.”

Meanwhile, the United States voted against a Kuwait-drafted UN Security Council resolution on June 2 calling for the protection of Palestinian civilians.

US Ambassador to the UN Nikki Haley described the resolution as “grossly one-sided” as she pinned the blame on much of Palestinians’ suffering on the Hamas movement, which runs the strip.

The Palestinian government in turn submitted in May a referral to the International Criminal Court in The Hague calling on prosecutors to investigate into what it called Israel’s “widespread and systematic” crimes.

Israel however contends that the Palestinian move is “legally invalid”, seeing that Israel is not a member of the ICC and that the latter does not have jurisdiction over it.

Israel has been accused of committing war crimes in its three wars in the Gaza Strip in the last decade.