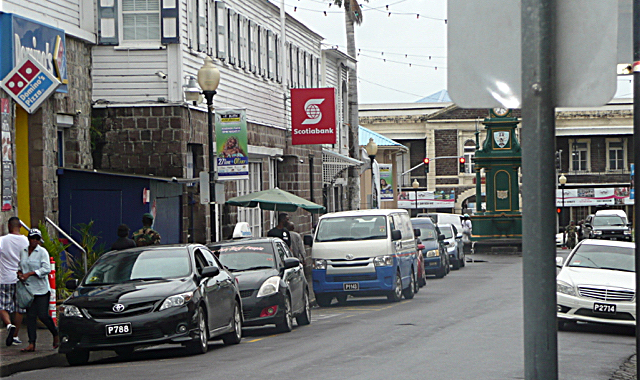 It was a regular work day in St. Kitts and Nevis Basseterre, St. Kitts, 9th July, 2018 (MyVueNews.com) – As the remnants of Tropical Storm Beryl trailed its rain-laden bands across St. Kitts and Nevis, most people might have thought it was going to be a disruptive day.

Instead, almost at the strike of 8 am, the rains began to beat a retreat. The message perhaps: Time for work.

So, the heavy rains, lightening and thunder turned into a generally overcast sky with good sunlight. And the cooling breezes made it almost a perfect day to do business.

All downtown Basseterre, it was business as usual. Banks were open. Supermarkets were busy and the buses were running since before 6 am.

People could be seen going about their business doing shopping, banking, and providing services. In addition, the ferry services were almost fully engaged. People were travelling between the ports of Charlestown and Basseterre.

Although many persons were delayed in getting to work, as a result of the torrential rainfall, it was just another regular work day for most people.

Late last week, Beryl became the first Atlantic named storm for the 2018 season. In fact, in less than 24 hours, Beryl was upgraded from a depression all the way to hurricane status. Small but intense, Beryl’s status was short-lived, as it soon entered areas near the Eastern Caribbean that subjected it to strong wind-shear.

However, what Beryl lost in wind-speed, it gained in moisture, creating bands of rain laden clouds as the system further disintegrated.

When the remnants of the storm reached St. Kitts and Nevis, the islands were subjected to lightening, thunder, and heavy rainfall. From about 2:30 am until 8:00 am Monday, the heavy rainfall suggested that the entire day might have been a deluge, perhaps some flooding, but as the rain retreated, it looked more like ‘business as usual’.