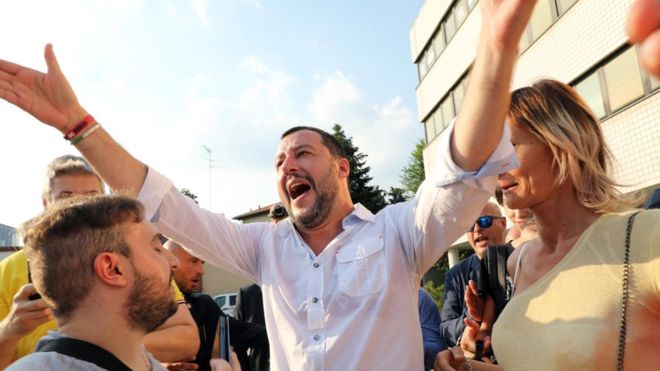 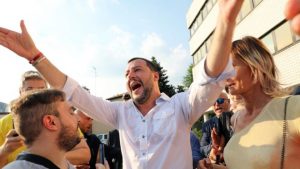 Italy’s right-wing populist Interior Minister, Matteo Salvini, has prompted a new outcry by saying he wants a census of the Roma community that would lead to non-Italians being deported.

After a chorus of criticism he said his only aim was to protect Roma children.

There are at least 130,000 Roma (Gypsies) in Italy, and many live in unlicensed camps on city outskirts.

He has tried to limit the number of migrants entering Italy by blocking charity ships that rescue people off the Libyan coast. The Aquarius eventually arrived in the Spanish port of Valencia at the weekend.

Since Mr Salvini’s League party came to power this month with the anti-establishment Five Star movement, he has focused heavily on immigration.

His remarks on Roma were eventually rebutted by his fellow deputy prime minister and leader of Five Star, Luigi di Maio, who made clear that a census was unconstitutional.

How did Salvini cause offense?

The interior minister told a local TV channel he had asked officials to “prepare a dossier on the Roma question in Italy at the ministry because nothing has been done since [ex-minister Roberto] Maroni and it’s chaos”.

There would be a survey to see “who [they are], how [they live] and how many of them there are, re-doing what was called the census”. “We’ll have a register,” he said.

Those Roma who had no right to stay in Italy would be deported but “as for the Italian Roma, unfortunately you have to keep them at home”.

Italy’s new populist government has as part of its programme a plan to deport 500,000 migrants.

An association that promotes Roma rights immediately pointed out that any census based on ethnic background was against Italian law and political opponents expressed horror at the idea. Jewish groups said the plan evoked memories of Mussolini’s 1938 race laws.

Paolo Gentiloni, the centre-left prime minister who led Italy for two years, tweeted: “Refugees yesterday, Roma today, tomorrow guns for all. How exhausting it is being bad.”

The League leader then clarified his position, insisting he was not proposing a register after all. No fingerprints would be taken, merely a survey of Roma camps to protect the thousands of children prevented from going to school.

Mr Di Maio welcomed Mr Salvini’s clarification, saying he was glad that the minister had denied plans for a register. “If something is unconstitutional, it cannot be done.”

Trump says US will not be a migrant camp