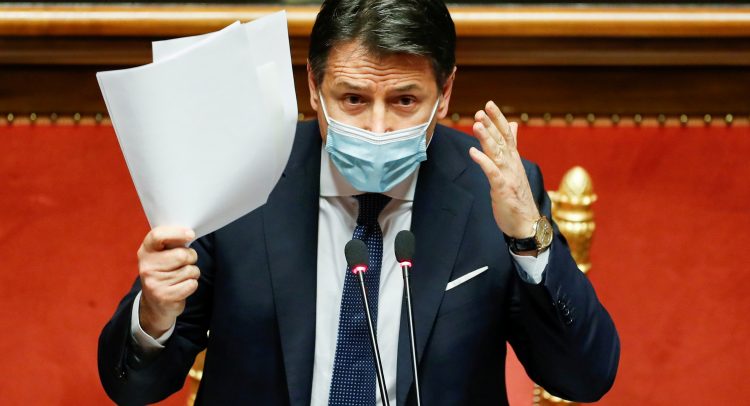 By Al Jazeera and News Agencies

Italian Prime Minister Giuseppe Conte resigned from office on Tuesday, two weeks after a key coalition partner quit his government over its handling of the coronavirus pandemic and an economic downturn.

Conte quit in the hope to be granted a fresh mandate by the head of state, President Sergio Mattarella, to form a new government after the coalition rupture left him without a majority in the Senate.

Mattarella is expected to hold two days of formal consultations with all the parties this week before deciding what to do next.

The president will start consultations with party leaders on Wednesday afternoon, a statement from his office said, adding that Conte had been asked to stay on in a caretaker capacity as the talks continued.

But once a prime minister resigns in Italy, there is no guarantee that a new coalition can form, and always a risk that early elections might end up as the only viable solution.

Italy’s main governing parties have warned that snap elections, two years ahead of schedule, will be the only way out of the impasse unless a solution is rapidly found.

Conte, who has been in office since June 2018, survived two confidence votes in Parliament last week but, with the defection of ex-Premier Matteo Renzi on January 13, crucially lost control of the Senate.

The departure of Renzi’s centrist Italia Viva party hobbled Conte’s administration in the middle of the pandemic, which has devastated Italy’s long-stagnant economy.

Conte initially resisted resigning and instead tried to attract centrist and independent senators to the government’s ranks.

But his efforts met little success and legislators from the co-ruling Democratic Party (PD) said he needed to stand down.

Al Jazeera’s Steffanie Dekker, reporting from the Italian capital, Rome, said it was “almost impossible” for Conte to govern in the wake of Renzi’s departure from government.

“Tomorrow we are expecting a vote on some legal matters which he [Conte] is expected to lose, so this [his resignation] is really a pre-emptive move to that,” she said.

Conte has no direct party affiliation but is close to the largest coalition group, the anti-establishment 5-Star Movement – a faction which has supported Conte and rejected Renzi.

Renzi has indicated he would return to the coalition on the condition that Conte accepts a string of demands.

“A new coalition government, either under Conte or a different prime minister, remains the most likely outcome,” said London-based Wolfango Piccoli, co-president of Teneo analyst group.

Al Jazeera’s Dekker said an alternative outcome could see a technocratic government formed to run the country until elections take place as scheduled in 2023.

“But we are going to have to wait and see … nothing really is resolved here,” she said. “It is a major crisis.”

Main Photo: Conte has no direct party affiliation but is close to the largest coalition group, the anti-establishment 5-Star Movement [File: Yara Nardi/Pool/Reuters]