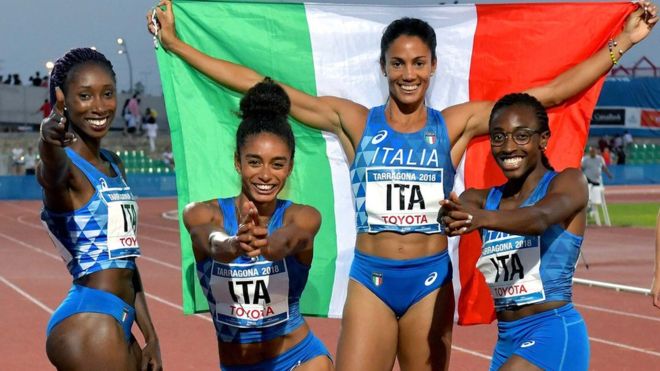 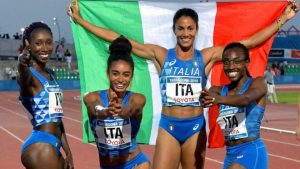 A picture of four triumphant multi-ethnic Italian athletes is being shared far and wide on social media.

It has hit a chord with Italians, as many people are hailing it a symbol of modern Italy, offering a “riposte” to the country’s government’s new tough immigration policies.

The photo has been shared more than 14,000 times on Facebook, and garnered hundreds of comments, most of which celebrate the women’s achievement and view them as a positive reflection of Italy’s multicultural make-up.

“Here is finally a place where the tricolour makes sense,” posted one Twitter user.

“You are the best witness of the great achievements of a forward looking Italian society,” tweeted Fontanaviva.

Leading the quartet is Libania Grenot, who was born in Cuba and married an Italian in 2006.

Maria Benedicta Chigbolu is a native Roman with an Italian mother and a Nigerian father.

Ayomide Folorunso has Nigerian roots, while Raphaela Lukudo was born in Italy to Sudanese parents.

New interior minister and leader of the right-wing League Party Matteo Salvini has been making headlines due to his controversial stance on immigration in Italy.

His party held a weekend-long rally in Pontida, a small town in the northern region of Lombardy, where he called for a pan-European alliance against “mass immigration”.

Roberto Saviano, a journalist who exposed the Neapolitan Mafia and a prominent critic of Salvini’s policies, praised the runners’ achievements and said their smiles “are the answer to the racist Italy of Pontida,” referring to the venue of the League party’s rally.

Former Prime Minister and former centre-left Democratic Party leader Matteo Renzi tweeted that it was a “beautiful news” and “a win for an Italy without fear”.

However, Matteo Salvini hailed the win on his latest Facebook post, saying the athletes had been “bravissime”, Italian for excellent. “It was a great win, I’d like to meet them and embrace them.” In the same post, he criticised his opponents.