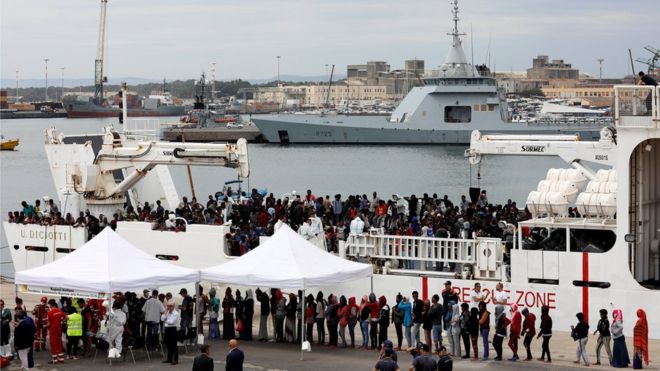 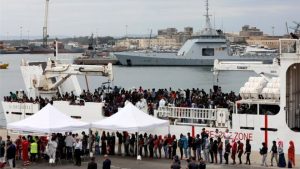 Italy’s Interior Minister Matteo Salvini has accused some migrants of hijacking the ship that rescued them off the Libyan coast.

It is alleged that in order to avoid being returned to Libya, at least two passengers forced the ship to turn away from the inbound Libyan coastguard.

The 67 passengers were eventually handed over to the Italian coastguard.

Mr Salvini called two suspects “violent hijackers, who will have to get off the Diciotti ship in handcuffs”.

Details of the incident remain unclear, but Italian media report that police boarded the coastguard vessel Diciotti to quiz its passengers.

They focused on two people in particular – one Ghanaian and one Sudanese – but did not uncover concrete evidence of a violent crime.

Officers then travelled to international waters to speak to the crew of the Vos Thalassa, the original rescue vessel which was supposedly hijacked, La Repubblica newspaper reported.

The Diciotti remained in the water off the city of Trapani, Sicily, while the investigation continued.

The final decision on the fate of the alleged hijackers rests with the local prosecutor in Trapani.

The local mayor, Giacomo Tranchida, told La Stampa: “If a poor beggar falls into the sea, we must save him… it is the law of the sea”.

The case in Trapani is the latest involving a migrant ship bound for Italian ports. Italy’s new government has blocked a number from arrival since taking office.

Mr Salvini, as interior minister, has brought in much tougher policies on migrant arrivals, as he promised to do during the recent election campaign.

The drama in Trapani comes as Mr Salvini meets with some of his European counterparts in Innsbruck, Austria, to discuss migration strategy.

Italy wants Europe’s external borders to be secured to stem the flow of arrivals on its shores; while Germany and Austria are more concerned with internal movement from Italy northward, towards their own borders.

After a meeting with Germany’s under-fire Interior Minister Horst Seehofer and Austrian counterpart Herbert Kickl, the trio appeared together at a joint press conference.

Brittania will not rule

Thai cave rescue to be turned into Hollywood movie