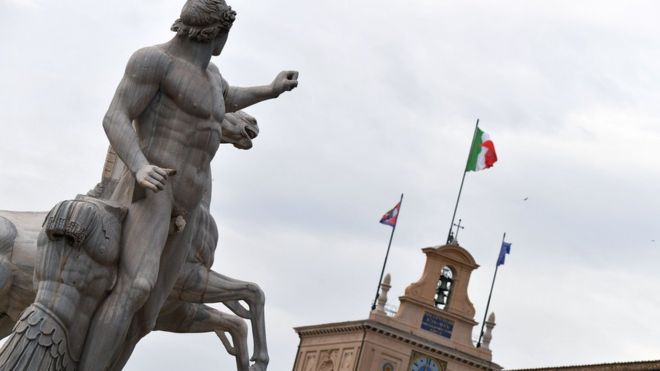 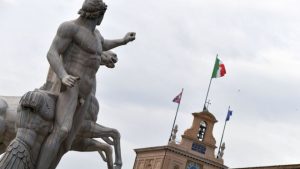 Italy has offered the highest returns in four years to sell government debt.

Amid political uncertainty investors demanded a higher return to take on Italian debt and the yield on 10-year government bonds rose to 3%, the highest level since 2014.

Elsewhere, European stock markets made a modest recovery and the euro rose after a turbulent session on Tuesday.

The benchmark index in Milan rose 1% and London and Frankfurt were trading higher.

Paris was dragged lower by a sell-off in French banks’ shares amid concerns about their exposure to Italy.

Seema Shah at Principal Global Investors said: “Demand at today’s auction was very encouraging, and clearly indicates that investors still have faith in the Italian economy, if not the government. Italy is unlikely to face major refinancing problems in the near term.”

Barclays investment strategist Hao Ran Wee said: “No investor would lend to the Italian government if they deem it as being unable to pay back its debt.”

Reports on Wednesday said that the anti-establishment Five Star Movement and far-right League had renewed efforts to form a coalition government after the president rejected their choice for the economy ministry over the weekend.

The parties were trying to find “a point of compromise on another name” after the president’s rejection of arch-eurosceptic Paolo Savona for the ministry.

Markets in Asia ended sharply lower on Wednesday, with the Nikkei in Tokyo falling 1.5% to its lowest close for six weeks, while Shanghai dropped 2.5%, Singapore shed 1.9% and Hong Kong’s Hang Seng lost 1.4%.

The falls in Asian stocks mirrored losses in the United States on Tuesday night, when the S&P 500 fell 1.2% and the Dow Jones ended 1.6% lower.

The importance of the diasporic community to national development will be the topic on Working for You on Wednesday, May 30