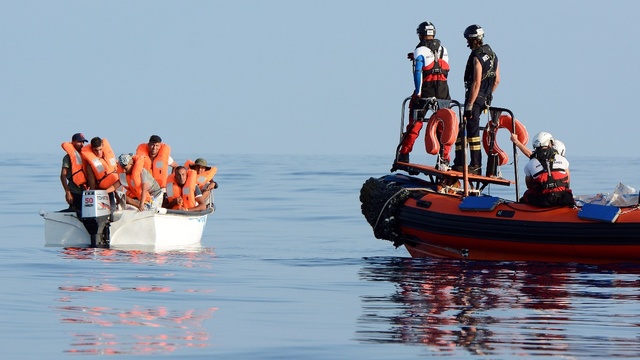 Italy on Monday denied safe harbor to 141 people rescued by a humanitarian ship off the coast of Libya last week, setting up another standoff with European Union allies over taking in migrants who try to cross the Mediterranean.

The Aquarius, run by Franco-German charity SOS Mediterranee and Doctors without Borders (MSF), picked up the people in two separate operations and is in international waters between Italy and Malta.

Malta said it had no legal obligation to berth the ship and Spain said its ports were not the safest destination.

Italy called on Britain to welcome the Aquarius because it was registered in Gibraltar, but the British territory on Spain’s southern coast said it should go to an Italian port.

More than 650,000 migrants have come to Italy’s shores since 2014, and Rome has accused its EU peers of not sharing the burden of taking in those who arrive on the bloc’s southern border.

The Aquarius spent nine days at sea in June after Italy’s new populist government took office and shut its ports to all humanitarian boats, calling its operators a “taxi service” and accusing them of helping people-smugglers — charges the charities deny.

“It can go where it wants, not in Italy!” far-right Interior Minister Matteo Salvini said on Twitter on Monday, mentioning France, Germany, Britain or Malta as possible destinations.

“Stop human traffickers and their accomplices,” he wrote.

Transport Minister Danilo Toninelli, who oversees ports and the coast guard, tweeted that, because of the Gibraltar connection, Britain “should assume its responsibility to safeguard the castaways”.

The Gibraltar government said in a statement the ship could no longer fly a Gibraltar flag from Aug. 20 and should revert back to the “underlying owners’ flag,” which is Germany.

Meanwhile, the Aquarius should be allowed to disembark “safely and promptly” at an Italian port.

The European Commission was in touch with several EU states and trying to help resolve the situation, a spokesman in Brussels said. While Britain could theoretically be considered as a destination port, it was not practical to bring the ship there.

Malta rejected any suggestion the Aquarius should dock in its ports, saying the latest rescue was made closer to Libya, Tunisia and Italy than to its own shores.

“Malta was neither the coordinating nor the competent authority (and) …the requests for the vessel to enter our ports are unwarranted and without legal standing,” it said in a statement.

Earlier on Monday, Malta’s armed forces rescued 114 migrants from a rubber dinghy taking on water 53 nautical miles (100 km) south of Malta and brought them back to the island.

In June, the Aquarius ended up taking some 630 migrants to Spain, which welcomed it. But on Monday, a government spokeswoman in Madrid said: “Spain is not the safest port because it is not the nearest one” for the ship to dock.

The ship’s search and rescue coordinator Nick Romaniuk said some migrants on board were sick and wounded and “need to be disembarked as soon as possible” for proper medical care.

Due to pressure from Italy and Malta, most charity ships are no longer patrolling off the coast of Libya.

Though departures from Libya have fallen dramatically this year, people smugglers are still pushing some boats out to sea and an estimated 720 people died in June and July when charity ships were mainly absent, Amnesty International estimates.

Protracted feuds between EU states over how to handle immigrants have thrown the issue back onto the European agenda. That is despite overall Mediterranean arrivals having dropped sharply since peaking at around 1 million in 2015.

EU border agency Frontex said on Monday it counted 73,500 “irregular border crossings” into the bloc so far this year via the sea and the Western Balkans route, more than 40 percent fewer than in the first seven months of 2017.