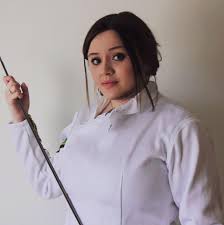 ‘It’s great to win a medal for Jamaica’

Caitlin Chang won Jamaica its first-ever medal at the Central American and Caribbean (CAC) Games, a silver, in the final of fencing’s individual epee competition on Saturday.

Chang, who began competing in the morning session, took silver after going down 10-15 to Cuba’s Jocelyn Cruz in the final.

“I did better than I expected today and it’s great to win a medal for Jamaica,” said Chang. “I am sad I lost the finals but I’m just putting it in the back of my mind, and I’m just super happy now that I managed to get this for myself and my teammates. They really spurred me on the whole day they really, really crazily cheered me on.

“It’s just an amazing feeling to have gotten a medal at these Games.”

Commenting on the historical aspect, she said: “We’re fairly new in terms of federations, so winning this medal for fencing is special. It’s very emotional because it’s historic in a way, it’s our first senior medal at this Games. I think one of our teammates won something similar in qualifying, but this is a historic moment and I’m a part of that.”

Head of the delegation for the Jamaica team, Lieutenant General Derrick Robinson, and Ryan Foster, CEO of the Jamaica Olympic Association (JOA), commended her efforts.

Robinson said: “It’s an excellent performance. I believe it’s the first fencing medal that we’ve got at the Central American and Caribbean Games. It’s good for the sport, and tomorrow I know there are other competitions that we’ll be entering in and we look for more successes.”