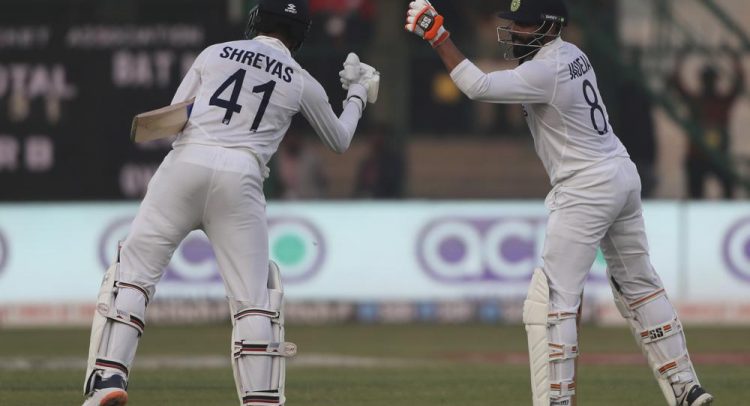 KANPUR, India (AP) — Shreyas Iyer and Ravindra Jadeja revived India in an unbeaten partnership of 113 to 258-4 against New Zealand at stumps on the first day of the first cricket test on Thursday.

India was reduced to 145-4 halfway through the middle session but Iyer progressed to 75 not out in his test debut, and Jadeja was 50 not out.

Play was called off owing to bad light with six overs remaining.

India was well placed at 82-1 at lunch — Mayank Agarwal fell early for 13 to Kyle Jamieson — but lost the other opener Shubman Gill, Cheteshwar Pujara and captain Ajinkya Rahane.

Gill scored his fourth test half-century when Jamieson bowled him through the gate on 52 off 93 balls. Gill hit five fours and a six.

Eight overs later, Pujara was caught behind off Tim Southee in a repeat of the batsman’s dismissals against Australia and England — edging outside off stump. Pujara scored 26 and India was 106-3.

Rahane added 39 runs for the fourth wicket with Iyer when Jamieson returned and castled Rahane on 35 for his third wicket.

New Zealand’s gains in the middle session began to fade, however, as Iyer and Jadeja dug in.

Iyer picked his moments against the spinners as he struck seven fours and two sixes. He reached his maiden test half-century off 94 balls.

Jadeja was patient and solid at the other end as the duo took India past 200 runs. He scored his 17th test half-century off 99 balls, including six fours.

Their 100-run partnership came off 192 deliveries.

“We found some swing early. It was up and down a little bit,” Jamieson said. “Hopefully the new ball swings a little bit in the morning. India is a fraction ahead, I think.

“We hung around pretty well and we need a good start in the morning.”

India has rested key senior players such as Virat Kohli, Rohit Sharma, Rishabh Pant and Jasprit Bumrah for this two-test series. This is also a first test assignment for new coach Rahul Dravid, who started his tenure in the preceding Twenty20 series with a 3-0 win over the New Zealanders.

This is the first test between the teams since the final of the inaugural world test championship in June, won by New Zealand in Southampton.

India hasn’t lost a home test against New Zealand since 1988.