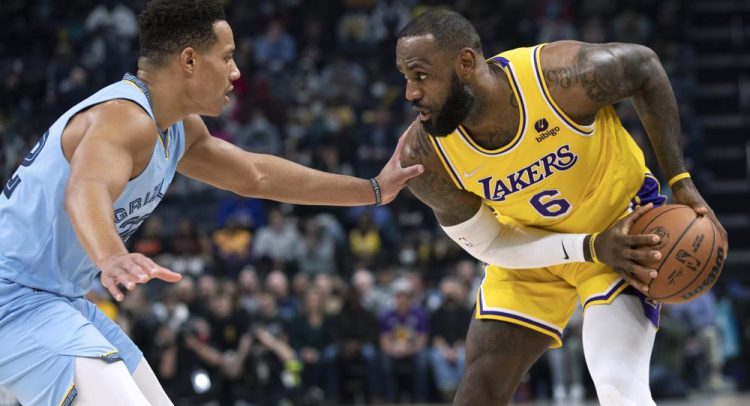 LeBron James led Los Angeles with 37 points — a day short of his 37th birthday — and 13 rebounds and a season-high eight 3-pointers. Russell Westbrook added a triple-double with 16 points, 10 rebounds and 12 assists.

The Grizzlies improved to 22-14 with their third straight victory, while the Lakers fell to 17-19 with their sixth loss in seven games.

Memphis trailed in the second half until Tyus Jones hit in a floater for a 93-92 lead with 6:50 left. Morant followed with consecutive 3-pointers for a 99-92 advantage with 4:28 to go. Bane sealed the win with two free throws with 5.1 seconds to go.

PHOENIX (AP) — Devin Booker scored 38 points, surpassing 10,000 for his career, and the Phoenix Suns beat Oklahoma City to end a two-game losing streak and tie for the NBA lead.

The Suns rebounded from home losses to Golden State and Memphis to pull even with the Warriors atop the league standings at 27-7.

JaVale McGee and Cameron Payne each scored 16 points, with McGee adding eight rebounds and Payne a team-high seven assists. Cam Johnson finished with 12 points, and Jalen Smith had 11 points and a career-high 14 rebounds.

Ty Jerome scored a career-high 24 points for the Thunder.

Both teams were without several key players and their head coaches.

BOSTON (AP) — Eric Bledsoe scored 10 of his 17 points in the fourth quarter, hitting a key 3-pointer down the stretch, to help los Angeles beat Boston.

Marcus Morris had 23 points and 10 rebounds, and Terance Mann and Luke Kennard also scored 17 apiece for the Clippers. Los Angeles ended a two-game skid and completed a season sweep of the Celtics on a night both clubs were short-handed.

The Clippers were without star forward Paul George for a third straight game with a torn ligament in his right elbow that could keep him out up to a month. But Los Angeles, which had lost five of six, led most of the game.

Boston was missing scoring leader Jayson Tatum, who was placed on the COVID-19 health and safety protocols list on Monday, and starting guard Marcus Smart, who was out with a hand injury.

Immanuel Quickley added 18 points as the Knicks’ reserves combined for 65 points. RJ Barrett was the only starter in double figures at 15 points. New York outscored Detroit 30-14 in the fourth quarter.

Saddiq Bey had a career-high 32 points for Detroit, and Hamidou Diallo had a season-high 31 points with 13 rebounds. The NBA-worst Pistons have lost four in a row and 18 of 19.

The Bulls extended their winning streak to a season-high five games. The Hawks, who are playing without 15 players due to the NBA’s health and safety protocols and injuries, lost for the fifth time in six games.

Trey Young scored 26 points, and Clint Capela added 18 for the Hawks in the opener of a six-game trip.

SACRAMENTO, Calif. (AP) — Chimezie Met made a corner 3-pointer at the buzzer to lift Sacramento past Dallas in the opener of a two-game set between the teams.

The teams will meet again Friday in Sacramento.

Ball also had nine assists, falling just short of his third triple-double this season and the fourth of his career. The Hornets won their third straight overall and fifth in a row in the series.

PORTLAND, Ore. (AP) — Rudy Gobert had 22 points and 14 rebounds and Utah beat Portland with Jazz star Donovan Mitchell out with a sore back.

Portland’s Damian Lillard and Norman Powell each scored 32 points. The Trail Blazers were missing seven players in the NBA’s COVID-19 health and safety protocols for the second straight game.

CDC warns against cruises, regardless of vaccination status