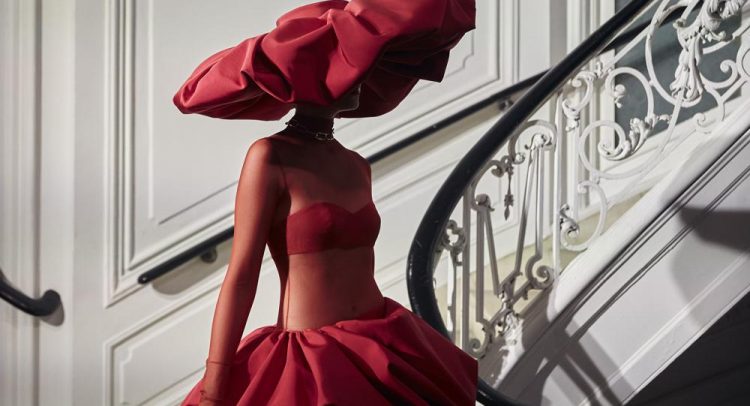 NEW YORK (AP) — With Janet Jackson resplendent in a black trouser suit on his front row and humongous hats on many of his models, Christian Siriano opened New York Fashion Week at the former townhouse of Elizabeth Taylor, rolling out sexy, slinky looks Wednesday to go with his trademark ballgowns.

He was inspired by Taylor, of course, for an Old Hollywood-infused show but told The Associated Press a slew of stylish icons were also muses: Audrey Hepburn, Marilyn Monroe, Bianca Jagger and Judy Garland among them.

“I was watching the girls do rehearsal and I was like, oh my God, imagine Elizabeth Taylor in her heels walking up these marble steps. How fabulous. It’s so cool to be here,” Siriano said.

Taylor lived in the six-story, French Renaissance Revival townhouse now nestled among office buildings in Midtown for several years in the 1950s during her Michael Todd era. It’s now an art space.

Siriano’s collection fit right in among the long winding staircases walked by his models. It was a bit of everything as he tweaks his business model to a more seasonless approach. It’s what his luxury customers want, he said.

Ultra-wide brim hats stole the show in black, royal blue and bright red. There was plenty of sparkle, and an asymmetrical set of huge tiered ruffle bell sleeves on one high-neck evening dress in white. One sleeve started at the shoulder and the other at the elbow.

Among his trademark show stoppers was a gown of baby blue for the skirt paired with a sparkly black spaghetti-strap top with a cinched waist and long black gloves to match. A riot of ruffles adorned a long-sleeve gold gown and he put narrow stripes in gold and black on another.

“This show really is about the return to glamour,” Siriano said. “I really wanted that. My customers are really looking for that, especially now. They were trapped for so long. It’s like, what can I wear that’s the most extravagant, fabulous thing?”

Siriano was among a handful of designers who didn’t give up on runway shows during the darkest months of the pandemic.

He has dressed them all, cementing a solid A-list fan base from Jackson herself (she shouted him out on Instagram) to Cardi B, Lizzo, Jennifer Lopez, Ariana Grande, Oprah Winfrey and Michelle Obama.

“I’ve wanted to dress Janet my whole life,” Siriano said. “She was everything I wanted growing up. She was it.”

When he told his mother, who usually attends his shows, that Jackson was going to be his guest, she responded: “Wow, that’s it. I don’t even have to come.”

So what’s a designer to do when he’s made his way through his bucket list?

“Janet and Madonna were big on my bucket list and I got to make them some things,” Siriano said. “Now I’m really excited about all the new Hollywood starlets. I just got to dress Sydney Sweeney a couple of times and I think she’s the most amazing actress ever.”

He’s in fittings for Monday’s Emmy Awards but was mum on exactly who he’ll be dressing. He did provide one tidbit: nominee Laura Linney for sure.

“It’s a good list,” Siriano said, “but I can’t ever tell until I watch them on the carpet.”