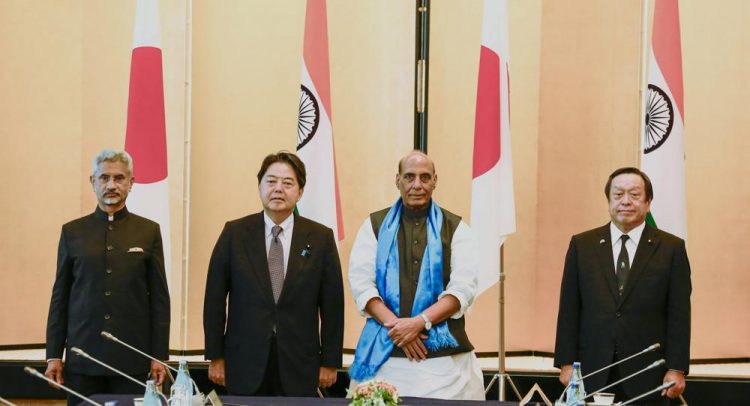 TOKYO (AP) — Japan’s foreign minister said Thursday there was “an increasing need” for India and Japan to step up security cooperation as the two countries held talks to further strengthen military ties amid growing tension from China and Russia in the region.

Foreign Minister Yoshimasa Hayashi and Defense Minister Yasukazu Hamada talked with their Indian counterparts, Subrahmanyam Jaishankar and Rajnat Singh, at their meeting in Tokyo, coming at a sensitive time as Russia holds a major multinational military exercise in its far east, with China and India participating.

“As we face many challenges in the Indo-Pacific and beyond the region today, we want to share the awareness of the security environment in the region so that we can achieve a concrete and strong cooperation between us,” Hayashi said.

He noted Russia’s war on Ukraine, China’s increasingly assertive and coercive actions, including escalating tension near Taiwan, as well as North Korea’s missile and nuclear threats.

Japan, which held its first “2+2” security talks in 2019 with both foreign and defense ministers, hopes to further elevate their defense cooperation in joint exercises, technology and equipment.

Hamada, who held defense talks with Singh earlier Thursday, said their bilateral and multinational joint exercises and other defense cooperation have expanded in recent years and will be raised to “new highs.” He said their first joint fighter jet training is being planned.

Tokyo has protested to Moscow about the ongoing military exercise including Russian-held disputed islands over which Japan claims sovereignty. Japan also raised “grave concern” about naval shooting drills jointly held by Russia and China off Japan’s northern coast over the weekend.

Foreign Ministry officials said Japan has warned India against joining drills set on the disputed islands and that the Indian troops were participating only in ground exercises in other areas.

Japanese Foreign Ministry officials said Wednesday that Japan wants to step up joint military drills and cooperation in development and transfer of military equipment and technology with India.

Japan hopes to expand military equipment transfers to back up its feeble defense industry as the country tries to bolster its military capability and spending as deterrence to growing threats from China, Russia and North Korea.

Japan and India are discussing joint development of unmanned ground vehicle technology, Japanese officials said. Japan’s earlier plan to sell sea-landing planes to India has been held up, partly by the costs.

Japan also wants to reaffirm India’s support in promoting a “free and open Indo-Pacific vision” that Japan promotes with the United States as part of the Quad framework that also includes Australia as a counter to China’s assertiveness in the region.