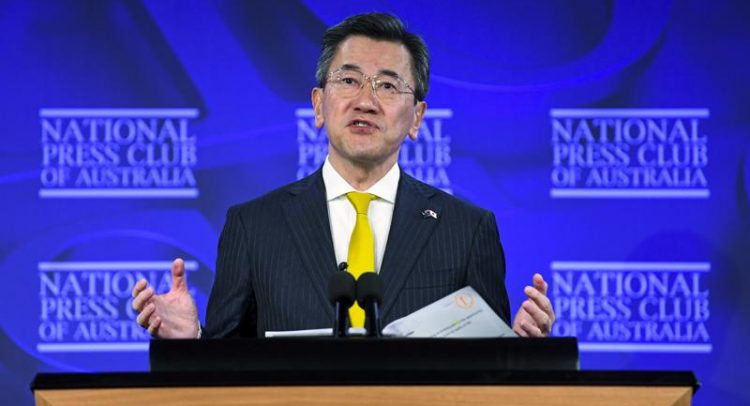 CANBERRA, Australia (AP) — Japan’s relationship with China was no better than notoriously strained Sino-Australian relations, the Japanese ambassador to Australia said on Wednesday.

Japan’s ties with China are often held up as an example to Australia of how productive relations can be maintained with Beijing despite national differences. But Ambassador Shingo Yamagami said he had encountered a common misperception in Australia about the state of Japan’s relations with China since he took up his post in December last year.

“The nutshell of that argument is Japan is doing far better than Australia when it comes to dealing with Japan’s neighbor, China,” Yamagami told the National Press Club of Australia.

“My simple answer is: no way. I’m afraid I don’t subscribe to such an argument. Why? Because each and every day Japan is struggling,” Yamagami added.

Japan, Australia and other countries needed to join forces to address challenges caused by China’s rise, he said.

“Don’t worry. You are doing an excellent job. We are in the same boat and we should work together,” Yamagami said.

China has become increasingly hostile toward Australia since early last year, when the Australian government called for an independent investigation into the origins of the COVID-19 pandemic.

Relations between the China and Australia have soured in recent years, with Australia blocking Chinese technology and investment in key infrastructure, and China using tariffs and other measures to reduce its imports from Australia.

Former Australian Prime Minister Kevin Rudd, president of the Asia Society, a New York-based think tank, a scholar of Chinese history and a former Australian diplomat to Beijing, is among the Australian foreign policy critics who applaud the Japanese example for dealing with China.

Rudd has urged both Beijing and Canberra to “put the megaphone away” in their bilateral dealings. Japan, which like Australia is a close U.S. ally, had managed its relationship with China without retaliatory trade sanctions in recent years through deeds instead of words, Rudd said.

President Joe Biden’s administration and Japan have recently said they will stand by Australia against what they describe as China’s campaign of economic coercion through informal trade sanctions.

“I applaud the way Australia has faced up to tremendous pressures in a consistent, principled and resilient manner,” he said.