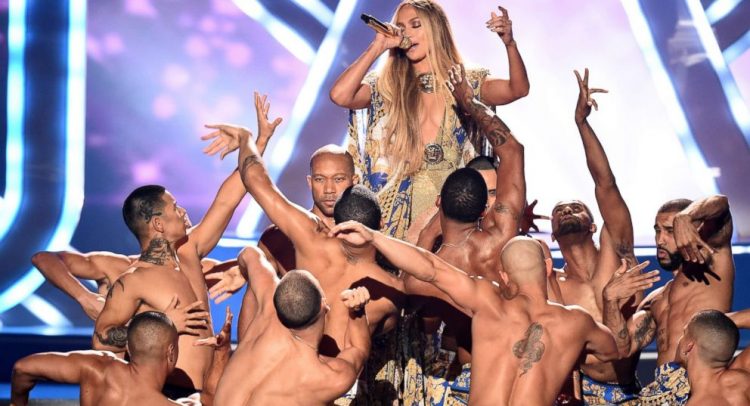 Well, that was a performance worthy of the coveted MTV Video Vanguard Award.

Jennifer Lopez came out Monday night at the VMAs and did not disappoint.

She began with her hit “Waiting for Tonight,” then quickly switched to another club thumper, “On the Floor.”

Then it was time for a minor outfit change as she ditched a flowing cape and got back to some classic J-Lo moves. It was almost like a mini concert, lasting around 15 minutes.The crowd got amped as she later busted out “Love Don’t Cost a Thing.” And of course Ja Rule came out later to perform a duet of “I’m Real.” A standing ovation that rocked the auditorium followed and lasted for almost a full minute.

It was announced earlier this year that Lopez, 49, would receive the lifetime achievement award that began in 1984 and was renamed after the King of Pop, Michael Jackson, in 1991. She is the first Latin artist to receive the honor.

Lopez now joins other icons who have previously received the award, including David Bowie, Beyonce, Kanye West and Madonna.

In her speech, Lopez said, “I grew up on MTV, and this really is a tremendous honor for me.”

She called her career an “incredible journey of dreaming my wildest dreams and watching them come true,” proving wrong people who said she “could only do one thing,” not act, sing, dance and everything else she’s accomplished.

“I always had it in mind mind, ‘Why not?'” she said. “So I always kind of had to forge my own path and make my own rules.”

But after two children, Emme and Maximilian, came into her life, “I had to change,” she added. “Through that unconditional love, my career my whole life became clearer in every way. Now today I stand here strong, better than ever.”

She couldn’t close without giving a shout out to her “twin soul” and beau Alex Rodriguez. She said being with him made her believe that “the sky is not the limit.”