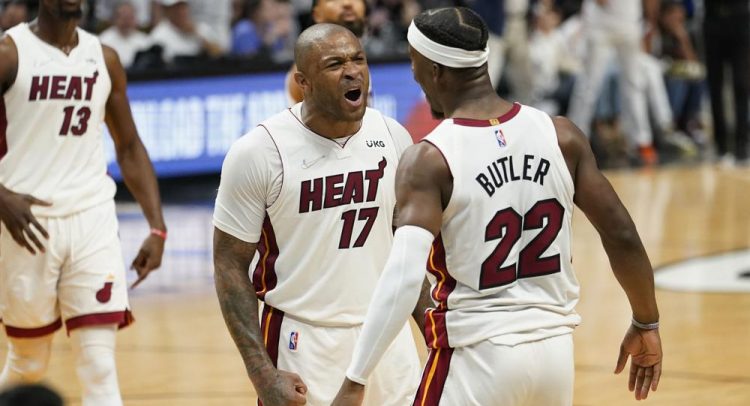 Jimmy Butler, Heat seeking to take a 2-0 lead over Celtics

MIAMI (AP) — Jimmy Butler doesn’t like being a called a scorer.

Never mind that the moniker seems appropriate. He’s averaging nearly 30 points per game in this postseason, has reached the 40-point mark three times in his last 10 games after having zero such regular season games since 2017, and carried the Miami Heat over the Boston Celtics in Game 1 of the Eastern Conference finals.

But say “scorer” to him, and he will scoff in disdain.

“I’ve been a quote-unquote scorer at other points in my career, and it didn’t work out too well for me,” Butler said.

Things have been working out just fine so far in this postseason for Butler and the top-seeded Heat, who’ll look to take a 2-0 lead in the East title series when they play host to the second-seeded Celtics again on Thursday night. It won’t be easy: The Celtics are 3-0 after losses in these playoffs, winning those bounceback games by an average of 14.7 points and getting two of those victories on the road.

But it remains unclear if they’ll have defensive player of the year Marcus Smart (mid-foot sprain) back for Game 2. The Celtics were also without forward Al Horford (health and safety protocols) for Game 1 — his status seems dubious at best for Game 2 given the NBA’s return-to-play rules — plus said coach Ime Udoka was sick Wednesday with a non-COVID illness.

“We have a lot of confidence,” Celtics center Daniel Theis said Wednesday as his team gathered for a film session.

Game 1 was a 118-107 loss for the Celtics on Tuesday night, though Boston pointed out after the game that the combined scores of the first, second and fourth quarters added up to Celtics 93, Heat 79.

That pesky third quarter, however, counted.

A 39-14 romp by Miami in those 12 minutes — Butler had 17 points in that quarter alone, outscoring the Celtics by himself — turned the whole game around, and the Heat never saw their lead trimmed to less than nine in the final quarter.

“Expect us to play better,” said Boston forward Jayson Tatum, who had six turnovers in that pivotal quarter. “Expect myself to play a lot better.”

In other words, he’s expecting to get to a higher level.

Butler is already there.

He’s averaging 29.8 points, 7.7 rebounds, 5.4 assists and 2.3 steals in these playoffs on 53.5% shooting. Since the NBA began charting each of those statistics, nobody has finished a postseason averaging so much in each category while shooting that well. And Heat coach Erik Spoelstra has a simple reason why Butler is in this space.

“Heightened attention to detail,” Spoelstra said. “But again, I don’t want to get in a long dissertation about it. If you’re driven by competition, and the stakes get raised, you’re going to raise your level of play. It’s not about trying to get bigger numbers. It’s about doing what’s required. And this level is high level, this competition, and he senses it, and he knows it. He feels it.”

Butler went 17 for 18 from the foul line in Game 1. The only player to make, or take, more free throws in a game against Boston this season was Kevin Durant — who was 18 for 20 for Brooklyn in Game 2 of the first-round series between the Celtics and Nets.

“He’s comfortable,” Boston’s Jaylen Brown said of Butler. “He’s very comfortable right now, and we’ve got to do a better job of breaking that rhythm that he’s in. That’s it. We’ve got to take the challenge.”

Butler’s last 40-point game in the regular season came on Jan. 25, 2017, for Chicago — three franchises and more than five years ago. But he’s had five such games in the playoffs since coming to Miami, the first two coming in the bubble two years ago when he carried the Heat to the NBA Finals. The other three have been in the last month, when he’s carrying the Heat again, despite his insistence that he’s not carrying anyone.

Miami Heat forward P.J. Tucker (17) and forward Jimmy Butler (22) celebrate during the second half of Game 1 of an NBA basketball Eastern Conference finals playoff series against the Boston Celtics, Tuesday, May 17, 2022, in Miami. (AP Photo/Lynne Sladky)