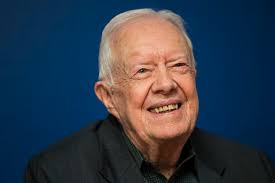 In a CBS interview scheduled to air Tuesday, Jimmy Carter did not mince words when denouncing President Donald Trump’s decision to hire John Bolton as his national security adviser.

“I have been concerned at some of the things he’s decided,” the 93-year-old former president told “CBS This Morning” host Norah O’Donnell, according to a press release from the network. “I think his last choice for national security adviser was very ill-advised. I think John Bolton has been the worst mistake he’s made.”

The excerpt CBS released on Monday did not include commentary from Carter on why he thought Trump had erred in hiring Bolton.

The excerpt CBS released on Monday did not include commentary from Carter on why he thought Trump had erred in hiring Bolton.

Bolton, a former United Nations ambassador whom Trump named to the role last Thursday, is known for his hostile foreign policy stances. He fiercely advocated for the Iraq War and promoted the false justification for it, has called for bombing Iran and North Korea, damagedthe United States’ foreign policy reputation, and has aligned himself with anti-Muslim hate groups.

When Bolton steps into the national security role on April 9, he’ll become the third person to serve in the position under Trump. He is replacing Army Lt. Gen. H.R. McMaster, who repeatedly clashed with president.

In the past, Carter has expressed some approval of Trump. In discussing special counsel Robert Mueller’s investigation into the Trump campaign’s ties to Russia with “CBS Sunday Morning” this past weekend, Carter said he hoped Trump would be able to finish out his term.

“[M]y own preference would be that he not be impeached, but that he be able to serve out his term, because I think he wants to do a good job,” Carter said. “And I’m willing to help him, if I can help him, and give him the benefit of the doubt.”

He’s also criticized the media for being too harsh on Trump.