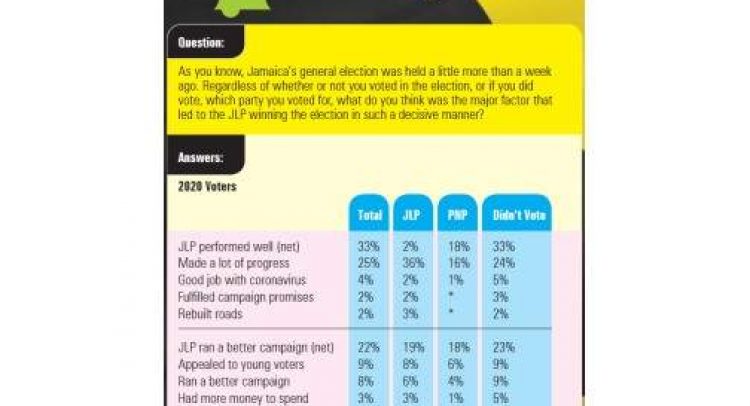 Most Jamaicans polled believe the landslide victory secured by the Jamaica Labour Party (JLP) in the September 3, 2020 General Election resulted from the party running a better campaign than its main opponents, the People’s National Party (PNP).

In fact the poll conducted by Bill Johnson a week after the election found that 20 per cent of PNP supporters thought that their party’s campaign was not good enough, resulting in the 49-14-seat whipping it received in the country’s 18th general election since 1944.

“Jamaicans believe the JLP won the recent election the old-fashioned way — by running a campaign that convinced voters they were doing a good job and were the better party to lead Jamaica for the next five years,” said Johnson whose research team, on a commission from the Jamaica Observer, questioned 1,000 voting-age Jamaicans islandwide between September 11 and 13 on issues relating to the election. The poll has a sampling error of plus or minus three per cent.

“Sixty-one per cent of JLP voters believe the party was able to effectively convince the electorate that it had performed well under challenging circumstances. These views were echoed by 36 per cent of those who voted for the PNP and by 56 per cent of those who didn’t vote for one reason or another,” added the veteran pollster in his analysis of the data.

Additionally, said Johnson, disorganisation within the PNP “and the fact they were never able to mount a viable campaign that gave people a reason to vote for them was also cited as a major reason for the JLP’s historic margin of victory, particularly among those who voted for the PNP”.

This was the second consecutive election in which the PNP — once regarded as a most efficient campaigner — has been found wanting in the area of organisation.

After the February 2016 General Election, former Prime Minister Bruce Golding had told the Observer that the campaign the PNP ran for that vote was the worst he had ever seen from the party.

“I have watched PNP campaigns since 1972 when I ran my first election. As a political practitioner I always found the PNP to be effective, sometimes awesome in executing a campaign. This one was the worst one I’ve ever seen,” Golding had told Observer reporters and editors at the newspaper’s Monday Exchange on February 29, three days after the election.

In that election the PNP lost its majority in the 63-member Parliament to the JLP, which won 32 seats in a nail-biting contest.

At the time political analysts pointed to what was a largely uncoordinated campaign lacking in focus as one of the factors leading to the PNP’s defeat.

The traditional complaint of vote-buying also emerged in the September survey, as Johnson reported that “39 per cent of those who voted for the PNP refuse to accept the legitimacy of the JLP’s landslide victory and believe the party stole the election by buying a significant number of votes”.