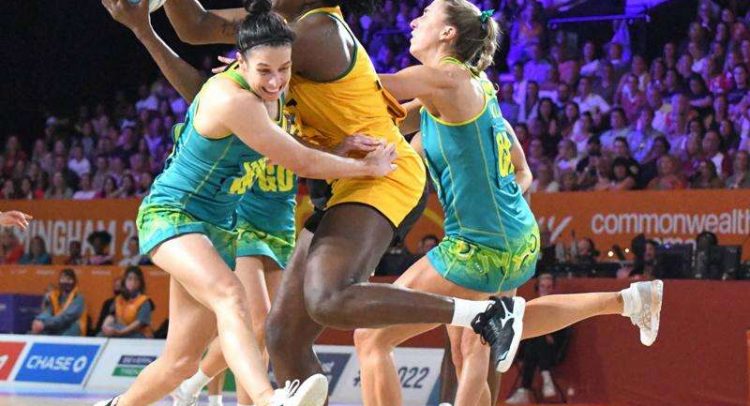 AT multi-sport championships Jamaica’s track and field athletes almost always hog the limelight and the attention of the legion of Jamaican fans. However, the just-concluded Commonwealth Games in Birmingham, England, was not one of those occasions.

The athletes performed creditably and won the usual quota of gold, silver and bronze medals on the track and in the field. But the nation’s netballers, affectionately referred to as the Sunshine Girls, danced and played their way into the hearts of everyone in Birmingham — and most of those who watched the netball competition on television screens and mobile devices.

Ranked fourth behind hosts England, New Zealand and Australia, the “determined dozen” went to the Games on a mission to upset the applecart and while not going all the way, did do so to some extent.

In their final group game the girls upset the world number one-ranked Australia Diamonds, beating them for the first time ever at the Games.

In the semi-finals they knocked off the world number two-ranked New Zealand for the second-consecutive time at the Commonwealth Games, to advance the gold medal match for the very first time.

What made the girls charming to the full-house crowd every time they played was their post-game celebrations as they danced to popular Jamaican music.

The girls danced into the hearts of the partisan English crowd who then backed them for every second of the final — which they eventually lost to Australia on Sunday.

There was no shame on the part of the girls as they had gone where no Jamaican team had gone before, capturing silver for the very first time.

And their performance also warmed the heart of head of the Jamaica Olympic Association (JOA), Christopher Samuda.

“The Jamaica Olympic Association salutes our Sunshine Girls on an admirable performance at the Birmingham Commonwealth Games,” he said.

“Their journey to the finals was a determined display of skill and a graphic study of composure and maturity that brought the house down on each occasion they played as they narrowly missed the gold medal.

“The Sunshine Girls’ appearance in the finale was always on the cards, having secured wins against Australia in the group stages and New Zealand in the semi-final,” he continued.

Samuda joined throngs of fans — Jamaicans and non-Jamaicans — in Birmingham in celebrating the girls’ gutsy performance.

“Yes, we got the silver but it was golden sunshine in the daytime and night-time as our girls sent a global message that they are champions by right and have never left, and will never leave centre court.”

“The JOA acknowledges the tireless work of Coach Connie Francis and her technical team who remained committed to the goal and stayed the course. The destination was clearly in sight for both the coach and technical staff; and there was no room for freeloaders on the journey as all seats were fully booked, taken and paid for,” he quipped.

Samuda pointed to the fact that the girls were able to draw on their experiences from four years ago in the Gold Coast to propel them in England.

“The bronze medal of the 2018 Gold Coast Commonwealth Games was a reminder to our girls of the mission to look forward and upwards, which resonated with us.”

He was happy with how they delivered with immediacy, with victory after victory until the final hurdle which proved to be a bridge too far.

“If you have the natural talent to bring home the bacon right away, why sit and look around to cook it and run the risk of ‘gas done’ or an electricity cut? The girls delivered instantly and professionally and never looked back.”

Samuda promised continued support of Netball Jamaica as the organisation quickly switches focus to the Netball World Cup which takes place in South Africa next summer.

“Birmingham 2022 will always be remembered for its glorious sunshine and the JOA will continue its support and, in partnership with the Tricia Robinson-led Netball Jamaica, to create rays of sunlight,” he assured.