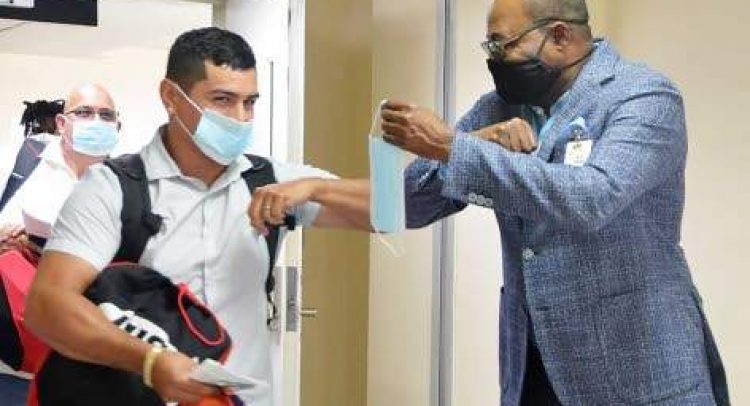 ‘Jobs are coming back’

MONTEGO BAY, St James — The arrival of the first of six flights — an American Airlines flight with 120 passengers — at Sangster International Airport here yesterday was a clear sign that the prospects for the more than 8,000 people employed at the airport were improving.

The flight also marked the the first phase of the reopening of the tourism sector, which has been shuttered since March due to the COVID-19 pandemic.

“Coming into this [Montego Bay] airport and being greeted by the red caps [porters] saying thanks, but moreso the prospects of 8,000 people who work at this airport seeing their jobs coming back, I think that this is the most satisfying of all and perhaps the greatest sense of hope that is provided. Yes, our jobs are coming back,” Tourism Minister Edmund Bartlett said yesterday.

The tourism minister, however, underscored that the security of jobs is firmly pinned to the strict adherence to health protocols.

“And with this [return of jobs] is the responsibility to make sure we follow the health protocols [so] that we manage this crisis well,” he said.

Hopeton Burnett, president of the 72-strong Montego Bay Airport Red Cap Porters Association, said the members were extremely happy to be back on the job.

“It’s good coming back to work after so long…Yes, we have to think about health over money but, at the same time, the country can’t remain closed.”

Bartlett was joined by Health and Wellness Minister Dr Christopher Tufton, along with other stakeholders, for the arrival of the American Airlines flight with stopover visitors and returning Jamaicans on-board.

President of the Jamaica Hotel and Tourist Association Omar Robinson, who said association members are excited to get the industry “rolling again”, disclosed that only a handful of hotels will reopen this week.

“We have been shuttered now since March, which is the peak season for us. Most of the hotels will reopen in July and they are now in the final stages of sourcing their PPEs [personal protective equipment], doing all their procurement and putting in all the procedures. So, we are ready to go. The workers are ready, they are excited to go back to work…” Robinson said.

Tufton said yesterday that he and his team “are happy with what we have seen so far”.

“I am looking forward to the next couple of days, certainly the next couple of weeks. And, based on the numbers that have expressed an interest to visit [Jamaica], we are encouraged. We are encouraged that non-Jamaicans have confidence in our processes here and that they are willing to comply with those processes in their interest, but also in the interest of the general population.

“And that augurs well for a stronger product when the time comes for further expansion and phases, which will come,” he said.

The health minister also thanked his more than 100 team members on the ground yesterday, “ably supported by immigration, Customs, the JDF [Jamaica Defence Force], the constabulary, tourism…All in all, this COVID-19 challenge has brought this country in a way that I think will only make us stronger going forward”.

There was consensus among the stakeholders at the Montego Bay airport that things got off to a seamless start yesterday, with the arrival of more than 500 passengers.