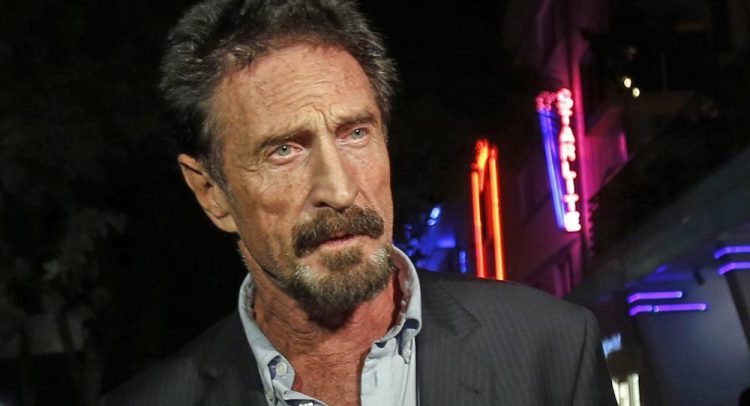 John McAfee, the outlandish security software pioneer who tried to live life as a hedonistic outsider while running from a host of legal troubles, was found dead in his jail cell near Barcelona on Wednesday.

His death came just hours after a Spanish court announced that it had approved his extradition to the United States to face tax charges punishable by decades in prison, authorities said.

McAfee, who was among other things a cryptocurrency promoter, tax opponent, U.S. presidential candidate and fugitive, who publicly embraced drugs, guns and sex, had a history of legal woes spanning from Tennessee to Central America to the Caribbean. In 2012, he was sought for questioning in connection with the murder of his neighbor in Belize, but was never charged with a crime.

McAfee’s body was discovered at the Brians 2 penitentiary in northeastern Spain. Security personnel tried to revive him, but the jail’s medical team finally certified his death, a statement from the regional Catalan government said.

“A judicial delegation has arrived to investigate the causes of death,” the statement read. “Everything points to death by suicide.”

McAfee’s death was confirmed after Spain’s National Court ruled in favor of extraditing McAfee, 75, who had argued in a hearing earlier this month that the charges against him by prosecutors in Tennessee were politically motivated and that he would spend the rest of his life in prison if returned to the U.S.

The court’s ruling was made public on Wednesday and was open for appeal, with any final extradition order also needing to get approval from the Spanish Cabinet.

McAfee was arrested last October at Barcelona’s international airport and had been in jail since then awaiting the outcome of extradition proceedings. The arrest followed charges the same month in Tennessee for evading taxes after failing to report income from promoting cryptocurrencies while he did consulting work, made speaking engagements and sold the rights to his life story for a documentary. The criminal charges carried a prison sentence of up to 30 years.

Nishay Sanan, the Chicago-based attorney defending him on those cases, said by phone that McAfee “will always be remembered as a fighter.”

“He tried to love this country but the U.S. government made his existence impossible,” Sanan said. “They tried to erase him, but they failed.”

Born in England’s Gloucestershire in 1945 as John David McAfee, he moved to Virginia as a child and grew up troubled, with a father who “beat him mercilessly” and killed himself with McAfee’s shotgun when the boy was 15, said Steve Morgan, who spent time with McAfee in Alabama in 2016 to talk about his life for a biography he’d been contracted to write. Morgan is also the founder of market research firm Cybersecurity Ventures.

“He told me his father never showed him an ounce of affection,” Morgan said, adding that recounting his father’s death was the only time during their long meeting that McAfee cried.

While McAfee’s tech legacy may have been overshadowed in recent years by his tumultuous life, Morgan said he sees his most lasting impact as a software and security pioneer.

McAfee founded his eponymous company in 1987. At the time, Morgan said, he was operating a BBS, a bulletin board system that served as a precursor to the World Wide Web and working with his brother-in-law. When the first major computer virus, called “Brain,” hit in 1986, “John instantly dialed up a programmer he knew and said, there’s a big opportunity. We need to do something. You know, we want to write some code to combat this virus,” Morgan said. He called the program VirusScan and the company McAfee Associates.

“He was a true pioneer, not just as a security technologist but as one of the first companies to distribute software over the internet,” Morgan said.

California chipmaker Intel, which bought McAfee’s company in 2010 for $7.68 billion, for a time sought to dissociate the brand from its controversial founder by folding it into its larger cybersecurity division. But the rebranding was short-lived, and Intel in 2016 spun out the cybersecurity unit into a new company called McAfee.

In the software industry, McAfee’s claim to fame was that he offered the first all-in-one virus scanner, said Vesselin Bontchev, a Bulgarian computer scientist and an early antivirus researcher. Prior to that, said Bontchev, researchers would only scan for one virus at a time. But there were only about a dozen computer viruses back then.

“Technologically, as a scanner, it wasn’t anything outstanding. It was just the general idea that was good. Not the implementation,” said Bontchev, a senior researcher at the Bulgarian Academy of Sciences.

Bontchev said McAfee was “a peculiar guy,” even back then. He said he wrote McAfee asking for a part-time job about the time the Soviet Union was breaking up so he could work on a post-doctoral dissertation in the U.S.

In response, McAfee told Bontchev in a letter that the Bulgarian was believed to be a Soviet agent so “they cannot work with me,” he said. “This is a really bizarre way to say no to somebody who is asking for a job.”

The two later met in the U.S. at the annual Virus Bulletin conference, said Bontchev. “I don’t think he was a typical American. He was just weird.”

McAfee twice made long-shot runs for the U.S. presidency and was a participant in Libertarian Party presidential debates in 2016. He dabbled in yoga, ultralight aircraft and the production of herbal medications.

In 2012 he was wanted for questioning in connection with the death of Gregory Viant Faull, who was shot to death in early November 2012 on the island in Belize where both men lived.

McAfee told AP at the time that he was being persecuted by the Belizean government. Belizean police denied that, saying they were simply investigating a crime about which McAfee may have had information. Then-Prime Minister Dean Barrow expressed doubts about McAfee’s mental state, saying, “I don’t want to be unkind to the gentleman, but I believe he is extremely paranoid, even bonkers.”

A Florida court ordered McAfee in 2019 to pay $25 million to Faull’s estate in a wrongful death claim. He refused to pay it, writing in a statement posted on Twitter that he has “not responded to a single one of my 37 lawsuits for the past 11 years.” He claimed to have no assets, writing that the order was a “mute point” — an apparent misspelling of “moot.”

In July of that year he was released from detention in the Dominican Republic after he and five others were suspected of traveling on a yacht carrying high-caliber weapons, ammunition and military-style gear.

Wired Magazine reporter Joshua Davis spent six months investigating McAfee’s tumultuous life in 2012, when he was living in Belize and being sought for questioning in connection with his neighbor’s murder. He described watching as McAfee took out a pistol to illustrate a point.

”‘Let’s do this one more time,’ he says, and puts it to his head,” Davies wrote. “Another round of Russian roulette. Just as before, he pulls the trigger repeatedly, the cylinder rotates, the hammer comes down, and nothing happens. ‘It is a real gun. It has a real bullet in one chamber,’ he says. And yet, he points out, my assumptions have somehow proven faulty. I’m missing something.”

FILE — In this Dec. 12, 2012, file photo, anti-virus software founder John McAfee answers questions to reporters as he walks on Ocean Drive, in the South Beach area of Miami Beach, Fla. McAfee, the outlandish security software pioneer who tried to live life as a hedonistic outsider while running from a host of legal troubles, was found dead in his jail cell near Barcelona, Spain, on Wednesday, June 23, 2021. His death came just hours after a Spanish court announced that it had approved his extradition to the United States to face tax charges punishable by decades in prison, authorities said. (AP Photo/Alan Diaz, File)

Royal Navy Task Group in Caribbean for the Hurricane Season