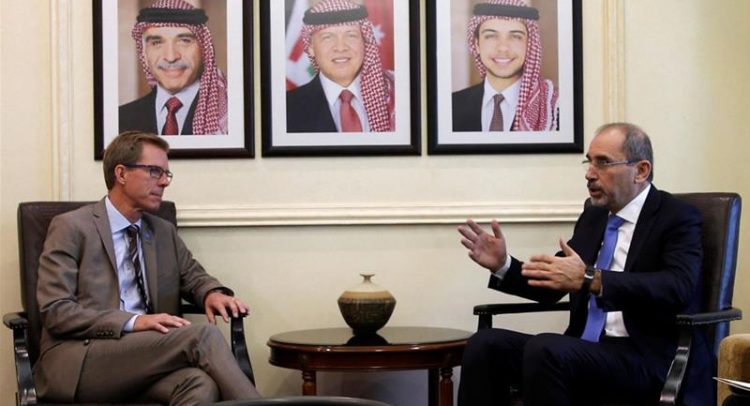 Jordan to hold talks with Russia over Syria’s Deraa province 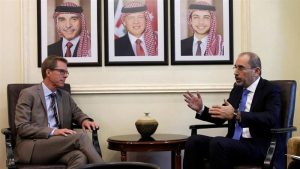 Jordan is set to hold talks with Russia this week over the situation in southern Syria and alleviating the humanitarian situation there, Jordan’s foreign minister said.

Jordanian Foreign Minister Ayman Safadi said on Monday he will meet his Russian counterpart Sergey Lavrov in Moscow later in the week to discuss developments in Deraa province, near Jordan’s border.

Talks leading up to the agreement – which stipulates the opposition handing over heavy weaponry to the government – were mediated by neighbouring Jordan.

Renewed fighting along Jordan’s northern border has prompted a new wave of refugees headed towards its territory.

Launched on June 19, the Syrian government’s push is intended to recapture the southern provinces of Deraa, Quneitra and parts of Sweida, still mostly held by opposition fighters.

Backed by Russian air support, forces loyal to al-Assad have retaken control of lost territory and continue to progress southwards where the last pockets of opposition remain.

Syrians fleeing the fighting and heading towards Jordan have been denied entry, with authorities there saying they do not have the resources to deal with more refugees.

“Jordan already has 1.3 million Syrians. Our country has reached its maximum capacity. Jordan has been shouldering this responsibility, and I must say, we’ve been doing so alone,” Safadi said on Thursday.

Karl Schembri, from the Norwegian Refugee Council, said aid agencies were ready to help if Jordan lets the refugees cross its border.

“We know that they are lacking the most basics; water, food, even shelter,” Schembri told Al Jazeera from the capital Amman.

“They are stranded there and they are facing some of the most dire conditions – it’s summer now, it’s getting hotter and they’ve been fleeing from extreme escalation of fighting in their areas. They are tired, exhausted and we still can’t reach them.”