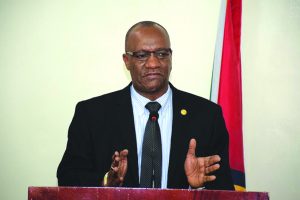 Director-General at the Ministry of the Presidency, Joseph Harmon, announced that his United States citizenship has been officially renounced.

Such a move will now pave the way for him to continue his political career in Guyana.
Harmon, who was the former State Minister of Guyana, was one of the four Government Parliamentarians who had to resign from the National Assembly and as Ministers in Government because of their dual-citizenship status.

Their resignations came on the heels of Court rulings earlier this year barring persons with dual citizenship from sitting in the National Assembly. But on Thursday, during a post-Cabinet press briefing, Harmon, when questioned about his dual citizenship status, confirmed that he was no longer a US citizen.
“I had submitted to the US embassy in Guyana an application to revoke my US citizenship, I can say to you now I have a response from the US which came on the October 8 indicating to me that with respect to July 2019 that my application was approved. Therefore, my US citizenship has now gone through the window, with respect from July 31 that is the situation. If I want to travel, I have to apply for a visa”.

The issue of dual citizenship arose late last year when former coalition Member of Parliament, Charrandas Persaud, who also held second citizenship, crossed over and voted in favour of an Opposition-tabled No-Confidence Motion (NCM) against the APNU/AFC Government, causing its defeat.
The validity of Persaud’s vote was challenged in the Court by Government supporter Compton Reid. The High Court, whose ruling was subsequently upheld in the Appeal Court, found that while persons with dual citizenship cannot sit in the National Assembly, the former MP’s vote on the NCM was lawful since he was a valid parliamentarian.

The ruling in question was delivered by acting Chief Justice Roxane George, who in January upheld the passage of the No-Confidence Motion against the Government, ruling that it was validly passed with the 33 majority.
At the time, the Government not only argued that 34 was the majority of 65 but it also argued that former Alliance For Change (AFC) MP Charrandas Persaud, as a dual citizen, should not have been in the National Assembly in the first place.

The fallout from her ruling on the dual citizenship issue, however, saw Teixeira and her Opposition colleagues Odinga Lumumba and Adrian Anamayah, as well as former Ministers Joseph Harmon, Carl Greenidge, Dominic Gaskin and Dr Rupert Roopnaraine resigning from Parliament and Government, only for them to then be rehired by the Government in different capacities in the same Ministries they once headed.
All, except Anamayah, had confirmed since then that they would have been renouncing their foreign citizenship.
In April of this year, Opposition Leader and PPP General Secretary Bharrat Jagdeo had committed to ensuring that future electoral lists submitted by his party to stand for Parliament would be free of dual citizens.