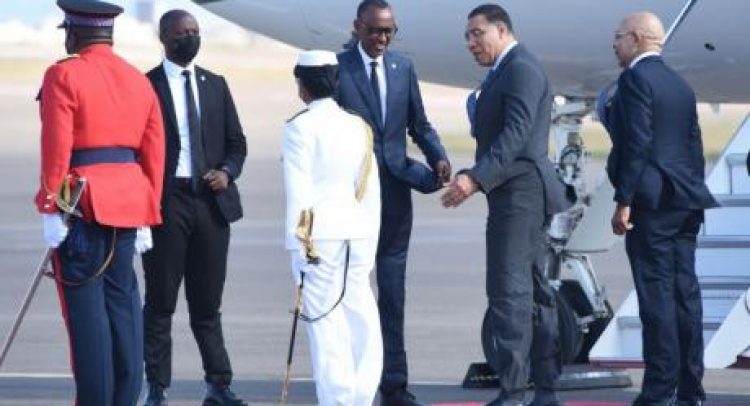 Chief Justice Bryan Sykes and the Chief of Defence Staff, Rear Admiral Antonette Wemyss-Gorman, were also among scores of officials who greeted the Rwandan president.

The East African president will, among other things, hold bilateral talks with Holness.

His visit comes during Jamaica’s 60th year of Independence.

Rwanda is also celebrating 60 years of independence this year.

His first order of business was to lay a floral tribute at the shrine of Jamaica’s first National Hero Marcus Mosiah Garvey at the National Heroes Park.

Later this evening, the Rwandan leader will participate in the launch of “Jamaica 60” on the lawns of Jamaica House.

On Thursday, Kagame will make a courtesy call on Sir Patrick and Lady Allen at Kings House.

At 2 pm the Rwandan president will make a presidential address to members of Jamaica’s bi-cameral legislature during a joint sitting of the Houses of Parliament.

Kagame will also meet with Leader of the Opposition Mark Golding on Thursday afternoon.

On Friday, the Rwandan president will meet with Holness at Jamaica House and hold bilateral talks.

The Rwandan president will be the incoming Chairman of the Commonwealth Conference of Heads of State and Government for the coming two years.

The next meeting of Commonwealth countries will be hosted by Kagame in Rwanda, at which time a decision will be made on who will be the secretary general for the next four years.

Jamaica’s Foreign Affairs and Foreign Trade Minister Kamina Johnson Smith and incumbent Baroness Patricia Scotland appear to be the leading contenders for the post at this time.

In a statement to Parliament last week, Holness said that the Jamaican Government did not intend to discuss with the Rwandan leader issues surrounding the race for the secretary general post.

As leader of the Rwandan Patriot Front, Kagame defeated Hutu extremist forces to end the 1994 Rwandan genocide which saw an estimated 800,000 people killed.

He became the country’s sixth president in 2000.

He was re-elected in 2010 and again in 2017, on a mandate to continue the stability and growth he brought to the country.

Kagame has been hailed for ushering in changes that have brought unprecedented socio-economic and political progress, peace, stability, as well as social cohesion to the Rwanda.

The country of approximately 12.3 million people, 50 per cent of which are under 20 years old, is one of the fastest-growing economies in the world, at about eight per cent per annum.

Meanwhile, the new Rwandan Ambassador Claver Gatete formally presented his credentials to the Governor-General on Monday.

Gatete is a former finance and infrastructure minister in Kagame’s Cabinet and was appointed earlier this year as ambassador-designate and permanent representative of Rwanda to the United Nations.

He has previously served as ambassador to the United Kingdom and Rwanda’s central bank governor.