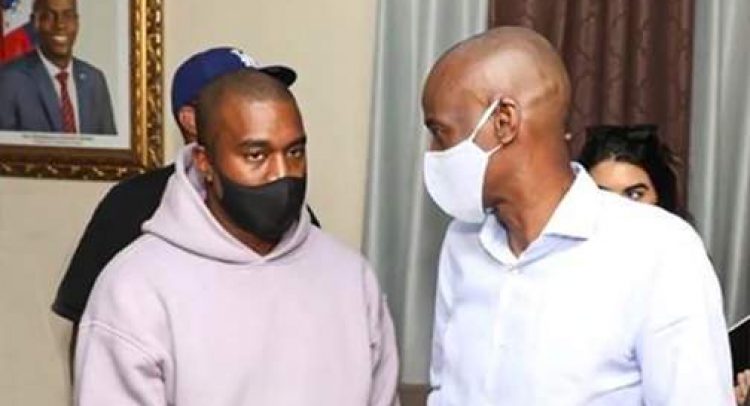 Kanye touches down in Haiti

Fresh from his recent visit to Jamaica, embattled American rapper Kanye West made a brief stop in the French-speaking republic of Haiti last Friday.

The 43-year-old landed at the Hugo Chávez International Airport in Cap-Haïtien and was met by Haitian President Jovenel Moïse as well as other officials.

“I’m with famous American rapper Kanye West who just arrived in the country to visit Labadee and l’Ile de la Tortue. I wish him a great visit,” Moise tweeted.

The purpose of West’s visit was not divulged. He, however, shared tweets with his 29.4 million followers on Saturday.

“”We are here to complete the revolution. We are building the future,” he posted. “Haiti is where our people started the first revolution that freed us from slavery.”

The first country to abolish slavery and the only State in history established by a successful slave revolt, Haiti’s sovereignty was declared on January 1, 1804.

This is West’s second visit to the Caribbean in recent weeks. The weekend before last, he made a visit to Jamaica and visited reggae singer Buju Banton at his Kingston-based studio. He also visited a popular eatery, Plantation Smokehouse, in St Ann. In both instances, he was pictured without mask.

Prime Minister Andrew Holness was quizzed as to whether the rapper had breached Jamaica’s COVID-19 protocols, including the mandatory 14-day quarantine period for all incoming passengers.

“My understanding was that he would have visited Buju Banton’s studio. The circumstances around that would have to be thoroughly investigated. I don’t have the details around that, as to whether or not permission was given; how that was arranged? Whether or not protocols were observed? The pictures shared on social media would have shown the international artiste and our beloved Buju Banton in studio presumably without wearing a mask,” said Holness.

West is one of the world’s best-selling musical artistes, having won a total of 21 Grammy Awards, making him one of the most awarded artistes of all time.

Three of his albums have been included on Rolling Stone’s 2012 500 Greatest Albums of All Time list; the same publication named him one of the 100 Greatest Songwriters of All Time.