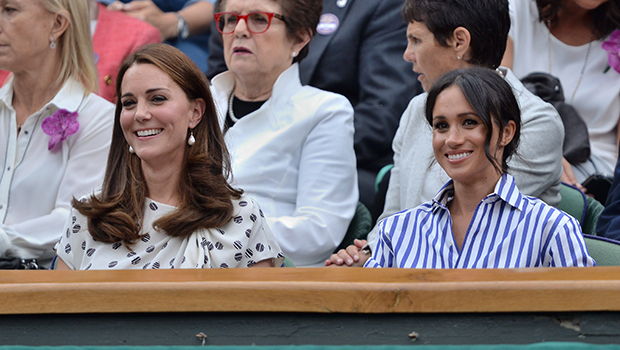 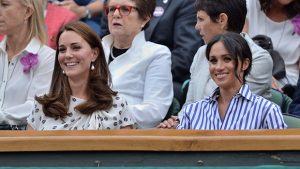 With her father running his mouth in the British tabloids, Meghan Markle has reportedly been leaning on her sister-in-law, Kate Middleton, who’s really ‘sympathetic’ to what Meghan’s going through!

Every time Thomas Markle Sr., 78, opens his mouth to a reporter, it puts about another kilometer or two between him and daughter Meghan Markle, 36. With the new Duchess of Sussex’s “at her wit’s end” over her father embarrassing her at seemingly every opportunity, who can Meghan turn to for support? Enter Kate Middleton, 36, who is “well aware of what Meghan is going through,” a source told Vanity Fair. “Her family has been dragged through the tabloids and she knows it’s not nice. She’s made a big effort to be kind to Meghan and look out for her.”

“They speak on the phone and Kate makes a point of inviting Meghan over,” the source tells Vanity Fair. “I’d say they try to see each other once a week, sometimes with Harry, sometimes Meghan goes on her own. Kate’s really busy juggling three kids; she has a lot on her plate and she has her own friendship group, but she has made an effort with Meghan. She’s been very sympathetic to what’s been going on with Meghan and her dad.”

It seems that this unlikely duo are becoming fast friends. The two have a shared love of dogs, chocolate, the English Countryside and tennis — which saw them appear together at Wimbledon. Kate has also reportedly recommended a number of London-based designers to Meghan, and, according to the source, routinely invites Meghan over to her apartment at Kensington Palace for tea. “Kate’s made a real effort to be kind to Meghan and to include her,” the source said. “They’re quite different characters but they get along well.”

It’s good to know that if/when Thomas Markle speaks to the press again, Meghan has Kate to lean on to help calm her fears and anxiety. The latest headache came when Thomas said that he’s “reached my limit with Meghan and the Royal family. I’m about to unload on them. …Perhaps it would be easier for Meghan if I died. Everybody would be filled with sympathy for her. But I hope we reconcile. I’d hate to die without speaking to Meghan again. …I refuse to stay quiet. What riles me is Meghan’s sense of superiority. She’d be nothing without me. I made her the duchess she is today. Everything that Meghan is, I made her.”