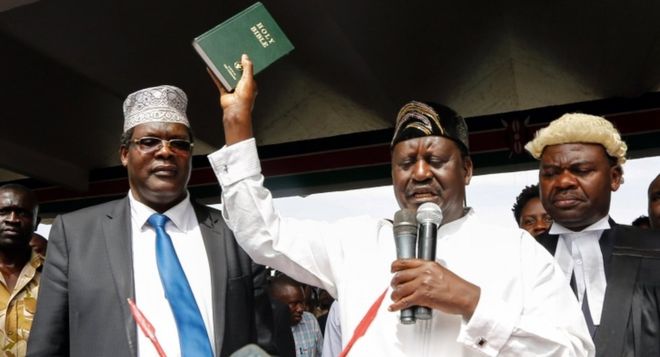 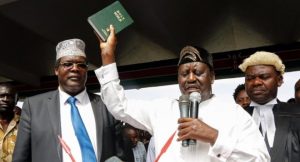 KTN, NTV, and Citizen TV were taken off the air over plans to broadcast opposition leader Raila Odinga’s unofficial “inauguration” on Tuesday.

The court has suspended the ban for 14 days while the case is heard.

Currently the stations remain off-air and there is no sign the government will comply with the ruling, reports the BBC’s Gladys Kijo in Nairobi.

Mr Odinga lost last year’s election and his swearing-in was widely seen as a publicity stunt, but the authorities said it was an act of treason.

Opposition groups have accused the Kenyan government of violating the public’s right to information about important events.

When asked about the matter, Joseph Mucheru, the minister of information, communication and technology, told the BBC it was a security issue and that only the security minister could answer the question of when the stations would be able to broadcast again.

The High Court also ordered the state not to interfere with the operation of KTN, NTV, and Citizen TV pending a full hearing.

The channels were taken off the air on Tuesday morning ahead of the swearing-in.

The interior ministry said in a statement circulating on social media that broadcasting the event – described as an attempt to “subvert or overthrow” the government – “would have led to the deaths of thousands of innocent Kenyans”.

Kenyan journalists denounced the move as outrageous and in a statement called for “respect of the constitution” and an end to the “unprecedented intimidation of journalists”.

Kenyans have been fuming at their inability to watch news and their favourite programmes for three days, and will welcome the court’s decision.

The affected media companies have suffered losses measured in the millions of dollars. The TV stations depend on advertising, so they could not make money during the period they have been off-air.

Human rights activist Okiya Omtatah, who petitioned the court, asked the government to pay for the financial losses that Citizen TV, KTN and NTV have incurred.

The stations command nearly two-thirds of Kenya’s TV audience. But the emergence of alternate advertising platforms, including social media, was already hurting their revenue streams. The three companies have been forced to lay off hundreds of workers in the past year to balance their books.

The Kenyan government had wanted the stations to remain shut indefinitely as police investigated Tuesday’s ceremony.

President Uhuru Kenyatta was sworn in for a second term last November after winning an election re-run in October that Mr Odinga boycotted.

Mr Kenyatta’s initial victory was overturned by the Supreme Court, which cited “irregularities and illegalities”.

The inauguration event in Nairobi’s Uhuru park on Tuesday was attended by thousands of Odinga supporters, and passed off peacefully.