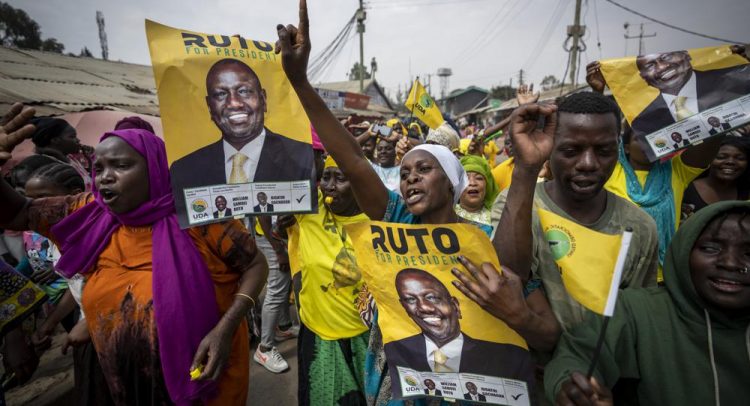 Ruto is expected to be sworn in on Sept. 13.

Opposition candidate Raila Odinga had alleged irregularities in the otherwise peaceful Aug. 9 election that was marked by last-minute drama when the electoral commission split and traded accusations of misconduct.

The court found little or no evidence for the various claims and called some “nothing more than hot air.” It also expressed puzzlement why the four dissenting commissioners participated until the final minutes in a vote-tallying process they criticized as opaque.

The commission “needs far-reaching reforms,” the court acknowledged, “but are we to nullify an election on the basis of a last-minute boardroom rupture?”

The Supreme Court shocked Kenyans in the previous election in 2017 by overturning the results of the presidential election, a first in Africa, and ordered a new vote after Odinga filed a challenge. He then boycotted that new election.

This time, Odinga was backed by former rival and outgoing President Uhuru Kenyatta in the latest example of shifting political alliances.

The election had been seen as the country’s most transparent, with results from tens of thousands of polling stations posted online within hours of the vote for Kenyans to follow the tally themselves. Such reforms were in part the result of Odinga’s previous election challenge.

Kenyans now wait to see whether any anger over the election will be channeled into the streets in a country with a history of sometimes deadly political violence. The election had one of the lowest turnouts — under 65% — in Kenya’s history of multiparty democracy.

The 77-year-old Odinga, who has pursued the presidency for a quarter-century, said he respected the court’s opinion but found it “incredible” that it rejected all claims. He said he’ll announce his plans later for the “struggle for transparency, accountability and democracy.”

The immediate reaction on the streets of Nairobi appeared to be calm.

“It’s very painful. We have accepted the court ruling and congratulate William Ruto. We just ask him to be the president of all people,” said John Okoth, a resident of the capital. “For Raila, it’s time for him to rest after losing five times.”

The 55-year-old Ruto, who had a bitter split with Kenyatta after Kenyatta made peace with Odinga to calm the 2017 election crisis, had appealed to Kenyans by portraying himself as a “hustler” from humble beginnings against the “dynasties” of Kenyatta and Odinga, whose fathers were Kenya’s first president and vice president.

Speaking after the court’s ruling, and to the laughter of his supporters, Ruto said he would call “my good friend” the outgoing president, whom he said he hadn’t spoken with in months. He said Kenyatta would be given “the respect and dignity a former head of state deserves.”

But the split still stings. “This marks the end of the politics of deceit, of betrayal, of conmanship,” Ruto said. He also vowed a Kenya that will be “gentler to the vulnerable” and one in which “no one will be vilified” or punished for holding different views: “Our competitors have nothing to fear.”

Kenyatta still hasn’t spoken publicly about the election since he cast his vote on Aug. 9, and his spokeswoman Kanze Dena didn’t respond when asked when he will do so.

Ruto now faces the challenge of finding the money to back up his campaign promises to the poor, as Kenya’s debt levels are now nearly 70% of its GDP. Already, he said, Kenyans were asking him when subsidized fertilizer and a credit program will be available.

Supporters of William Ruto hold campaign posters of him as they celebrate and march along a street in the Kibera neighborhood of Nairobi, Kenya Monday, Sept. 5, 2022. Kenya’s Supreme Court has unanimously rejected challenges to the official results of the presidential election and upheld Deputy President William Ruto’s narrow win in East Africa’s most stable democracy. Ruto is expected to be sworn in on Sept. 13. (AP Photo/Ben Curtis)