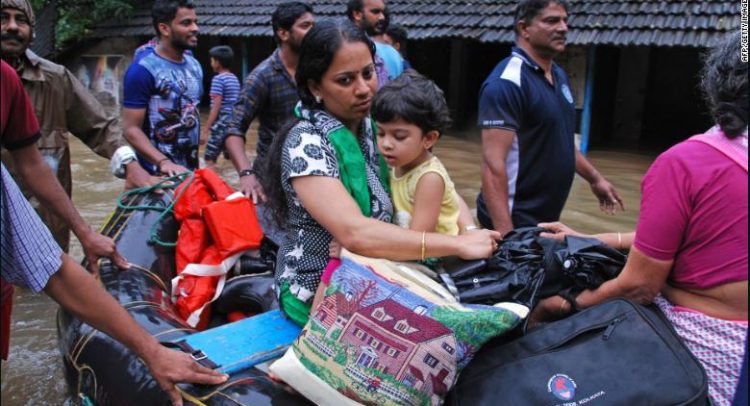 The death toll has steadily risen over the past week as rescue workers scramble to reach thousands of people stranded by floodwater. The army, navy and coast guard have been sent in to assist, and fisherman have been asked to help with rescue efforts.
Thirteen of Kerala’s 14 districts remain under a red alert, the highest warning level issued during emergencies in India, according to India’s National Disaster Response Force (NDRF), which has deployed 53 teams across the state.
Over a thousand personnel from military and disaster authorities are now involved in the rescue mission. Meanwhile, over 100,000 people have been forced to seek shelter in relief camps, NDRF senior commander Rekha Nambiyar told CNN.

Search and rescue efforts have been further complicated by limited transport; railway tracks and roads are too flooded to use, and operations at the international airport in the city of Kochi have been suspended until Saturday.
Rescue teams have taken to the air instead. Pinarayi Vijayan, Kerala’s chief minister, tweeted on Thursday asking residents to “stand in open areas on top of buildings and houses” to be airlifted, and said lifeboats and life jackets would be airdropped.

Monsoon rains are to be expected in India this time of the year. But after days of abnormally heavy rains, 34 of the state’s 40 dams reached full capacity and were opened to release water in an effort to prevent potentially disastrous breaches, officials said today.

“There was a 40-50% excess of monsoon rains this year and because of the incessant rains, there have been landslides and entire areas inundated under water,” said Nambiyar of the NDRF.
The Indian Meteorological Department (IMD) has reported that heavy rains are expected to continue until Saturday.

Oil heads for weekly loss on concerns over trade row