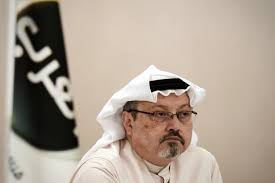 Callamard presents her report to the Human Rights Council in Geneva, of which Saudi Arabia is a member.
Agnes Callamard, the United Nations special rapporteur on extrajudicial executions, is presenting her report on the killing of Saudi journalist Jamal Khashoggi.

Callamard’s presentation before the UN Human Rights Council in the Swiss city of Geneva started at 13:00 GMT on Wednesday and will be followed by a news conference.

In her 100-page report, which was made public on June 19, Callamard says that Khashoggi’s killing at the Saudi consulate in Istanbul in October last year constituted a premeditated extrajudicial killing for which Saudi Arabia’s leadership was responsible.

The report also concluded that Saudi Arabia’s Crown Prince Mohammed bin Salman, also known as MBS, should be investigated regarding the incident.

Saudi Arabia carries UN Human Rights Council membership and its representatives may be in the room while Callamard presents her findings.

UK Prime Minister Theresa May said on Wednesday she wants to see accountability for the killing.

“We do want to see accountability for this horrific murder… We expect Saudi Arabia to take the action necessary to ensure such violations of international and national laws can’t happen again,” May said in parliament.

“We’re obviously closely following the continuing investigation,” she added. “We expect it to proceed in line with internationally recognised legal standards.”

The killing of Khashoggi by a team of Saudi operatives inside the consulate on October 2 provoked outrage and marred the image of MBS. Khashoggi’s body has never been found.

Callamard says in her report that Saudi Arabia violated the Vienna Convention on consular relations, the UN charter on the prohibition of the use of force in times of peace as well as the principle of the right to life.

The targeted killings of journalists, dissenters and human rights defenders, more generally, are on the increase, warned Callamard in her recent remarks, adding that the most worrying pattern is the impunity that surrounds those actions.

Hatice Cengiz, Khashoggi’s fiancée, has called for an international investigation into the killing.

“Not only high-level officials are involved in the killing, but the report says Saudi Arabia has tried to eliminate the evidence of it. It’s scandalous,” Cengiz said earlier this week.

Changing Saudi narrative
Khashoggi was a contributing columnist for the Washington Post and a US resident.

He was killed at the consulate when he arrived to pick up documents he needed for his planned marriage.

The 59-year-old Saudi insider-turned-critic was strangled and his body cut into pieces by a team of 15 Saudis sent to Istanbul for the killing, according to Turkish officials.

Turkish media reports suggested his remains, which have never been found, were dissolved in acid, while Al Jazeera’s sources said there was circumstantial evidence suggesting Khashoggi’s remains were incinerated in the garden of the consular general’s residence, 300 metres from the consulate.

Riyadh officials say they do not know where Khashoggi’s remains are and blame his death on “rogue” agents.

Saudi Arabia’s narrative of what happened changed over time.

Riyadh first maintained Khashoggi left the consulate shortly after entering, but as Turkish authorities continued to leak evidence of high-level involvement, the country eventually admitted its agents carried out the killing with a series of contradictory explanations.

Saudi Arabia now says Khashoggi was killed in their consulate after a fight broke out with the people he met there, a claim that was debunked by Callamard’s report, in which the Saudi agents were cited discussing the journalist’s murder and dismemberment before he arrived at the consulate.

Eighteen Saudi nationals were arrested over the issue, but the international community is sceptical about their trial going on in Riyadh.

In November, the CIA concluded that MBS ordered Khashoggi’s assassination, according to US media reports. The finding contradicts Saudi government assertions that MBS was not involved. US officials expressed high confidence in the CIA assessment.

The US isn't interested in dialogue with Iran, France says