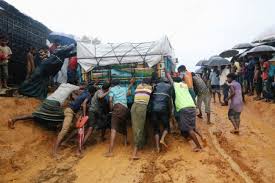 Bangladesh is deploying thousands of extra police to Rohingya refugee camps in the south, officials said, after a series of mostly unexplained killings that have sown fear among hundreds of thousands of people who have fled from neighboring Myanmar.

Since August, when a military crackdown in Myanmar forced many of the Muslim minority to cross the border into Bangladesh and seek shelter in the crowded camps, 19 people, some of them community leaders, have been killed.

Police have made a number of arrests in connection with some of the killings, but say the motives often remain unclear.

Conducted after dark and often by groups of men wielding pistols, knives, and sticks, the killings have sent a chill through the camps, which are guarded by the Bangladesh army during the day but manned by fewer police officers at night.

A.K.M. Iqbal Hossain, police superintendent of the coastal town of Cox’s Bazar under whose jurisdiction the camps fall, said a special force of roughly 2,400 men was being formed to guard the refugees.

“We have 1,000 police officers right now for a million people, so you can imagine,” he said.

More than 700,000 Rohingya have taken shelter in Cox’s Bazar district since August, joining thousands who were already living there, making it the world’s largest and fastest growing refugee camp.

Even before the August exodus, there had been violence in the camps, which Bangladesh police and aid workers have previously blamed on a struggle for control of supplies to the camps.