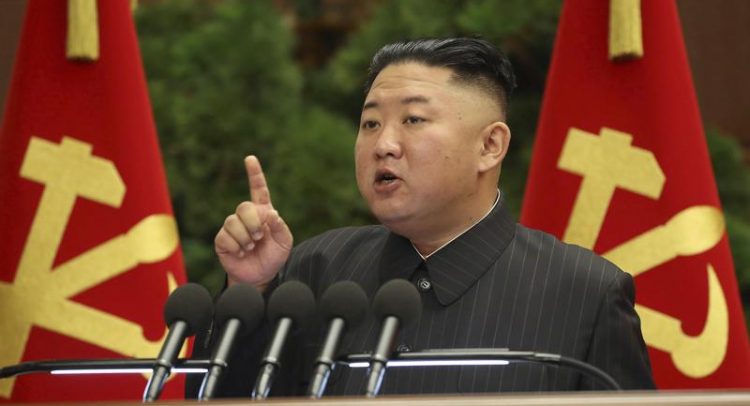 SEOUL, South Korea (AP) — North Korean leader Kim Jong Un berated top officials for failures in coronavirus prevention that caused a “great crisis,” using strong language that raised the specter of a mass outbreak in a country that would be scarcely able to handle it.

The state media report Wednesday did not specify what “crucial” lapse had prompted Kim to call the Politburo meeting of the ruling Workers’ Party, but experts said North Korea could be wrestling with a significant setback in its pandemic fight.

So far, North Korea has claimed to have had no coronavirus infections, despite testing thousands of people and sharing a porous border with China. Experts widely doubt the claim and are concerned about any potential outbreak, given the country’s poor health infrastructure.

At the Politburo meeting, Kim criticized the senior officials for supposed incompetence, irresponsibility and passiveness in planning and executing anti-virus measures amid the lengthening pandemic, the North’s official Korean Central News Agency said.

Kim said “senior officials in charge of important state affairs neglected the implementation of the important decisions of the party on taking organizational, institutional, material, scientific and technological measures as required by the prolonged state emergency epidemic prevention campaign,” according to KCNA. This “caused a crucial case of creating a great crisis in ensuring the security of the state and safety of the people and entailed grave consequences.”

The report also said the party recalled an unspecified member of the Politburo’s powerful Presidium, which consists of Kim and four other top officials.

The reference indicated Kim may replace his Cabinet Premier Kim Tok Hun, who would be held responsible for failures in the government’s anti-epidemic work, said Hong Min, a senior analyst at Seoul’s Korea Institute for National Unification.

There also was speculation that Kim Jong Un may have sacked Ri Pyong Chol, one of his top military officials. North Korean TV video of the meeting showed Ri looking downward and not participating in a vote as Kim and other senior officials on stage raised their hands to indicate their consent on a matter that the broadcast didn’t specify.

“There is no possibility that North Korea will ever admit to an infection — even if there were mass transmissions, the North will definitely not reveal such developments and will continue to push forward an anti-virus campaign it has claimed to be the greatest,” Hong said.

“But it’s also clear that something significant happened and it was big enough to warrant a reprimanding of senior officials. This could mean mass infections or some sort of situation where a lot of people were put at direct risk of infections.”

But other experts said Kim could be responding to illicit border trade that defied his lockdown measures or setting the stage for a political shakeup or purge to solidify his grip on power as he navigates perhaps the toughest time of his nine-year rule.

South Korea’s Unification Ministry, which deals with inter-Korean affairs, said it had no immediate information to share about the North Korean report and that it wouldn’t make prejudgments about the country’s virus situation.

Wang Wenbin, spokesperson of China’s Foreign Ministry, raised the possibility of helping North Korea in the event of a major outbreak of COVID-19.

“China and the DPRK have a long tradition of helping each other when they encounter difficulties,” Wang said, referring to North Korea by its official name, the Democratic People’s Republic of Korea.

“If necessary, China will actively consider providing assistance to the DPRK.”

From the start of the pandemic, North Korea described its anti-virus efforts as a “matter of national existence,” banned tourists, jetted out diplomats and severely curtailed cross-border traffic and trade. The lockdown has further strained an economy already battered by decades of mismanagement and crippling U.S.-led sanctions over the country’s nuclear weapons program.

Kim during a political conference earlier this month called for officials to brace for prolonged COVID-19 restrictions, indicating that the country isn’t ready to open its borders despite its economic woes.

North Korea has told the World Health Organization it has not found a single coronavirus infection after testing more than 30,000 people, including many described as having fevers or respiratory symptoms.

North Korea’s extended border controls come amid uncertainties over the country’s vaccination prospects. COVAX, the U.N.-backed program to ship COVID-19 vaccines worldwide, said in February that North Korea could receive 1.9 million doses in the first half of the year, but the plans have been delayed due to global shortages.

“Kim will likely find scapegoats for the incident, purging disloyal officials and blaming their ideological lapses. This may provide Pyongyang justification for demanding that citizens hunker down more, but it could also be political preparation for accepting vaccines from abroad,” said Leif-Eric Easley, a professor of international studies at Ewha Womans University in Seoul.

In this photo provided by the North Korean government, North Korean leader Kim Jong Un speaks during a Politburo meeting of the ruling Workers’ Party in Pyongyang, North Korea, Tuesday, June 29, 2021. Kim ripped into senior ruling party and government officials over what he described as a serious lapse in national efforts to fend off COVID-19. The North’s official Korean Central News Agency said Wednesday, June 30, 2021 that Kim made the comments during the meeting, which he called to discuss a “grave incident” in anti-epidemic work that he said created a “huge crisis” for the country and its people. The content of this image is as provided and cannot be independently verified.(Korean Central News Agency/Korea News Service via AP)