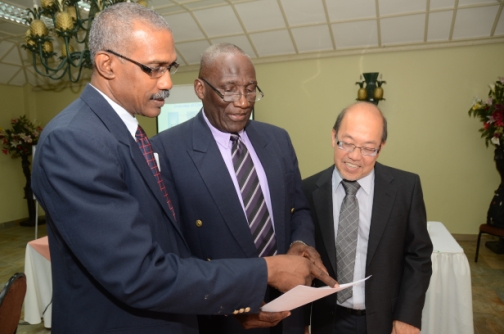 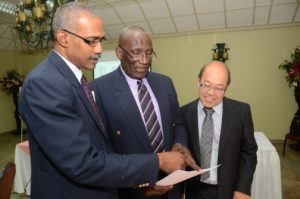 More than 20 agricultural stakeholders from the region are benefiting from a five-day training worshop in Climate Resilience Advanced Crop Modelling, which opened in Kingston, Jamaica, on Monday.
The participants are from Jamaica, Barbados, Belize, Guyana, St Lucia, St Vincent and the Grenadines, and Trinidad and Tobago, and include agronomists, agricultural extension officers and agrometeorologists, farmers, and researchers.

Crop and livestock impact modelling, which is relatively new to the Caribbean, uses technology to develop and test multiple climate and weather scenarios, validates them using field data, and then explores expected impacts and possible options for adaptation in farming.

The objective is to better prepare farmers to deal with weather uncertainties associated with climate change.

Industry, Commerce, Agriculture and Fisheries Minister Audley Shaw, who opened the event at The University of the West Indies (UWI), Mona Campus, on Monday, pointed out that the Jamaican Government, over the years, has been working with several partners to build the resilience of the farming sector to climate change.

These, he said, include encouraging farmers to employ more efficient water use and developing and applying climate-smart land husbandry techniques.

The minister pointed to initiatives such as the Adaptation Fund Programme, which focuses on protecting livelihoods and food security in vulnerable communities by improving land and water management, strengthening coastal protection, and building institutional and local capacity for climate change adaptation.

“We are also promoting protected agriculture that will help [to] bring on board the technology that will result in high productivity and continuous production in addition to building resilience in the face of climate change,” he noted.

He said, however, that based on the irreversible nature of climate change and the susceptibility of the Caribbean to cycles of drought and floods, more needs to be done in order to safeguard the region’s agriculture sector.

“Much of what agriculturalists, small farmers, extension workers [and] large agricultural conglomerates used to know about climate weather patterns and agriculture do not seem to hold true any longer. Farmers no longer know when to expect rain or to anticipate dry seasons or which crops to plant when because of the changes they are seeing,” Minister Shaw pointed out.

He said further that the sector is dominated by small holdings, whose owners often lack access to financial and other resources that are needed to modernise, while noting an over-reliance on rainfall for crop and livestock production.

He said estimates suggest that more than 90 per cent of domestic production in Jamaica has no supplemental irrigation, and over the last several years the Government has spent more than $1 billion to provide assistance to farmers impacted by drought.

He said that he was pleased with the partnership involving various stakeholders for the staging of the seminar.

“I also welcome the use of modern technology in problem-solving by the application of a computer model to real world problems, in order to assess crop production in different scenarios — water and nutrient management, climatic and economic risk(s), and environmental sustainability,” the minister added.

He said that through the use of the simulations, “we will have a clear picture of what to expect under various scenarios”, thereby being better able to make the necessary plans to improve crop system management.

Among the presenters this week will be pre-eminent scholar from the Institute for Sustainable Food Systems, University of Florida, Professor Gerrit Hoogenboom.

The stakeholder partners include the UWI, Government of Jamaica Adaptation Programme and Financing Mechanism for the Pilot Programme for Climate Change, and Inter-American Development Bank/Climate Investment Funds.

How 'Godzilla: King of the Monsters' carries a powerful message about the environment