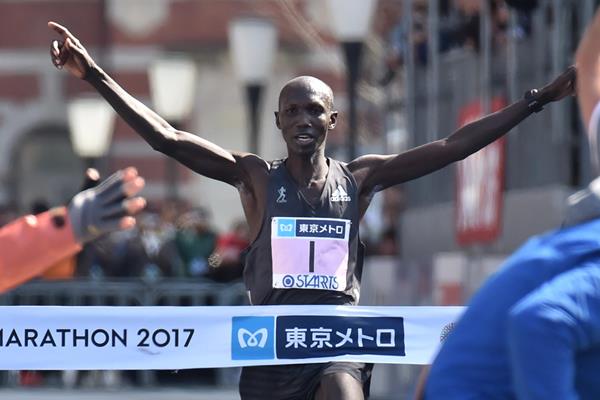 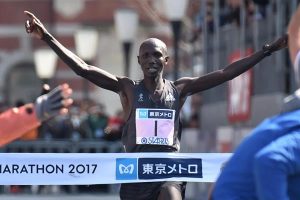 Kipsang, a former world record holder, experienced mixed fortunes after his 2017 victory in Tokyo, dropping out of Berlin in September but bouncing back to finish second at the New York City Marathon in November. Already the course record holder in Tokyo, he’s aiming to better that on Sunday. His goal? 2:02:50.

“My main aim is the world record,” said Kipsang, whose personal best is 2:13:13 set in 2016. “If the temperature and weather is ideal, then I will push the second half.”

Last year he reached the midway point in 1:01:22, a pace he said was too ambitious.

“It was little bit too fast. I want to go through the half marathon point in 61:40 this year, and then pick up the pace from there.”

Kipsang’s main competitors are Ethiopian Tsegaye Mekonnen, who has a 2:04:32 best from the 2014 Dubai Marathon, his compatriot Feyisa Lilesa, the 2016 Olympic silver medalist, and Kenyan Dickson Chumba, whose 2:04:32 personal best was set in the 2014 Chicago Marathon. Chumba won in Tokyo that year and has finished third in each subsequent edition. He’s also looking for a fast time as well as another podium finish.

Following a third place finish at the 2011 World Championships, Feyisa won in Tokyo in 2016, the first major victory of his career. He has a 2:04:52 best from the 2012 Chicago Marathon, but hasn’t broken 2:10 since the Rio Olympic Games.

“I am hoping that this year’s Tokyo Marathon will change my fortune, just like the 2016 Tokyo Marathon did,” he said. Mekonnen is hoping to improve his personal best and perhaps crack 2:04.

Vincent Kipruto, who was also fifth at the Berlin Marathon last year with 2:06:14, has contested the Lake Biwa Marathon three times and finished on the podium each time so Like Chumba, runs well in Japan. Kipketer meanwhile second in Tokyo last year with the personal best of 2:05:51. For Amos Kipruto, Tokyo marks his first major marathon appearance.

Yuta Shitara leads the domestic entrants. Shitara, who clocked a 1:00:17 national half marathon record in 2017, has run two marathons so far in his career, 2:09:27 in Tokyo and 2:09:03 in Berlin, both last year. Shitara has been on a roll recently. He recorded stages bests in both the New Year Ekiden as well as Inter-Prefectural Ekiden and won the Kosa 10 miler as well as the Karatsu 10 miler. Said the 26-year-old: “I am determined to run under 2:09. If I stay with the leaders, the fast time will come.”

Other Japanese contenders include Hiroto Inoue and Hiroyuki Yamamoto, eighth and tenth here last year in 2:08:22 and 2:09:12, respectively. Inoue is confident. “My goal for Sunday is a 2:06 marathon. I am determined to be a world class runner someday.”